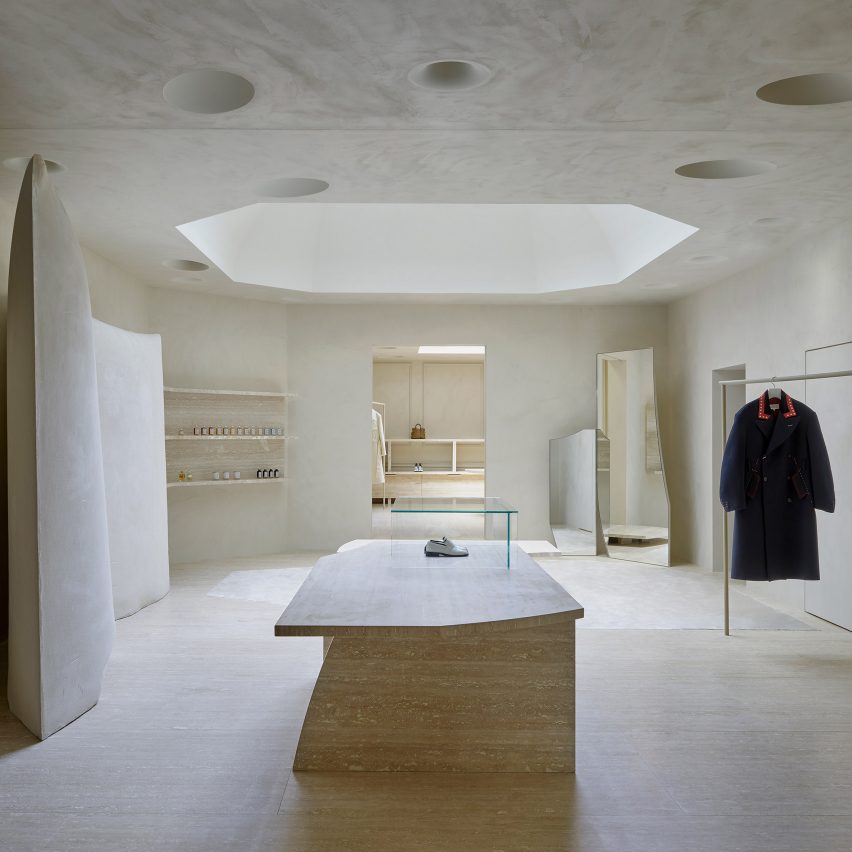 Located at 22 Bruton Street, the boutique is laid out across 190-square-metres and displays Maison Margiela’s Co-Ed collections, with men’s and women’s ready-to-wear alongside accessories such as shoes, jewellery and eyewear.

The store features a pale, tonal colour palette in keeping with the Parisian label’s all-white studio, with the plaster walls and ceilings retained in their natural finish and floors and fixtures made from travertine.

A number of the store’s walls and columns were individually hand-cast in textile moulds, leaving behind folds and dents to create the illusion of fabric billowing in the wind.

This unconventional casting method is intended to reflect a garment construction technique used by the fashion house that is designed to disrupt the “anonymity of the lining” and reveal the inner workings of a garment.

“The gypsum casts in textile formwork translate the ‘anonymity of the lining’ concept into an architectural element,” explained Maison Margiela.

Holtrop, who founded Amsterdam-based Studio Anne Holtrop in 2009, installed items of “misfit” furniture throughout the space. Featuring familiar forms that have been warped and skewed, these were designed to lean and fold around the interior.

“Normally the porosity of travertine is carefully filled with an epoxy in exactly the same colour as the stone,” explained the studio. “With an infill of white epoxy, the porosity of the stone adds an accurate drawing, a staining of the material itself.”

The finish was inspired by another of Maison Margiela‘s characteristic techniques called décortiqué, where haute couture technicians cut through the layers of a garment in order to reveal its construction.

“All that remains is the skeleton, the core components, which enable you to recognise what the item once was,” explained Maison Margiela. “It entails cutting around the seams to emphasise the structure and detailing.”

In contrast to the rest of the store, the walls and ceilings of the fitting rooms are coated in layers of hand-brushed, high gloss paint reminiscent of Japanese lacquer cabinets.

According to Maison Margiela, the store reflects its “evolved visual language” which was developed by John Galliano after taking the helm as creative director in 2014.

Holstrop’s gypsum-cast design was first introduced during the label’s Artisanal AW 2018 show, in which Galliano revealed the structures, interlinings and inner padding of clothes that would normally be concealed.

Photography is by Henry Bourne.