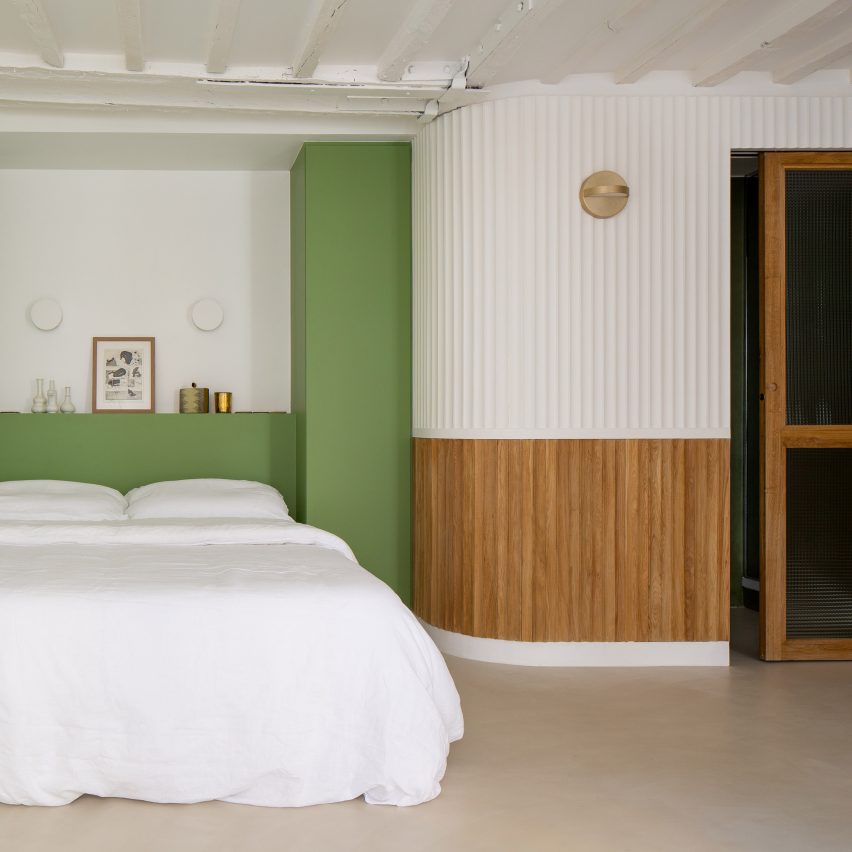 “They bought a small apartment ideally located in the famous district of Saint Germain des Près, but it was quite old and very dark. Their main wish was to feel like in a hotel with a simple and pure decoration.”

The studio removed all partition walls, the uneven wooden floor and false ceiling to increase the height of the space and reveal its beams.

“The first inspiration is The Paper House by Shigeru Ban,” Gerlier said.

“Like this house, a large curved wall crosses the space to offer different places a large living room opens to the outside, a corner office to isolate and of course all the water rooms are hidden behind this partition.”

The studio added a curved partition wall that wraps around the corner of the apartment like a “cocoon”, enclosing the compact kitchen, shower room and toilet.

The wall has scalloped wood-panelling that has a two-tone design that aims to visually extend the space.

“The curved wall that integrates the water rooms creates a cocoon effect,” said Gerlier. “This wall opens to the outside to maximize the feeling of space.”

Its curved form is interrupted by a recessed section that is used to house a kitchenette.

Kitchen cabinetry sits within the recessed opening and was finished with a bright green colour. A waxed concrete backsplash provides a textural backdrop.

Walls were painted white and waxed concrete was used across the floors to unify the space and reflect light.

“The apartment being relatively small and not very luminous, first-floor courtyard facing, we chose light colours for the living room.”

Alongside the kitchen, a frosted glass midcentury sliding door leads to a small shower room housed within the curved partition wall.

Green waxed concrete covers the walls of the curved shower room and aims to create a feeling of intimacy.

Pierre-Louis Gerlier Architecte is an architecture studio based in France.

Other Parisian apartments include this home designed by Toledano + Architects with an undulating timber wall and this apartment that was designed around a child-proof home.

Photography is by Ercole Salinaro.