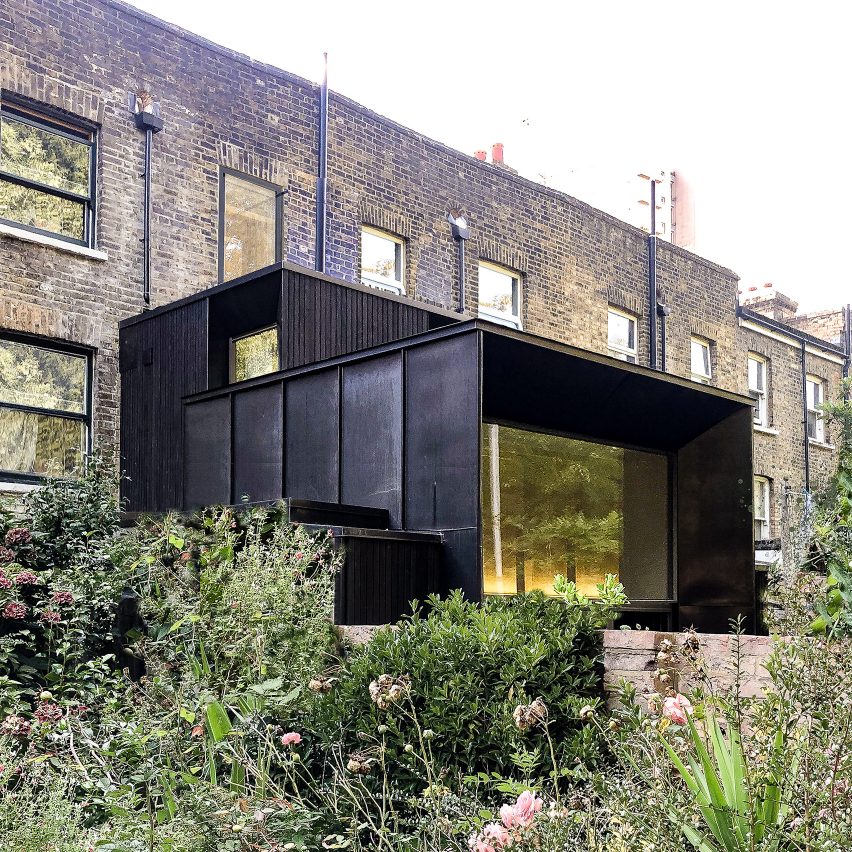 Hertfordshire studio Micheal Collins Architects has added a boxy, two-storey copper and charred larch extension to a terraced house alongside a railway station in south London.

The extension and renovation was named Jewellery Box, as a nod to the way the Victorian terrace and subdued extension hide the home’s more vibrant interiors.

“Our clients talked about the house having a jewellery box quality, where a simple form is pulled apart to reveal a more complex, light and textured interior,” explained Micheal Collins Architects founder Micheal Collins.

“The extension to the rear is conceived as two cubic volumes that slide across a plinth, with areas of glazing set between,” he told Dezeen.

On the ground floor, an oxidised-copper extension contains a kitchen and dining space, while a smaller charred larch-clad extension above houses a first-floor bathroom. This is topped with a roof deck that is accessed from the second floor.

“The block-like exterior was inspired by the simple poetry of stacked boxy self-built ‘add-ons’ and ‘closet returns’ seen along the rear of railway terraces that reflect the varied lives of their inhabitants, we weren’t keen on trying to create a highly ordered composition,” said Collins.

“A key issue was how to create a sense of spatial generosity on this constrained site, and how to address the steep natural embankment at the rear.”

The studio clad the outside of the home in dark industrial materials to reference the nature of the site alongside the railway tracks, and the home’s former owner who was a chimney sweep.

“The use of oxidised copper and charred larch were informed by the context,” said Collins. “Specifically the urban memory of a famous south London chimney sweep that lived and ran his business from the property, but also the sooty quality of the brickwork along the railway embankment, and the oxidised metal infrastructure found along the line.”

In contrast to the subdued exterior the interior spaces were decorated with bright colours, with Inchyra Blue cabinets and surfaces combined with gold backsplashes in the kitchen.

“An aquatic datum of flush panels conceal utility areas, larders, and a toilet wrapping around the internal walls of the kitchen to create a sense of immersion and continuity with the trained plants around the garden walls,” added Collins.

Overall the architect believes that the home is fitting to its location and would not make sense anywhere else.

“We hoped the project would be as idiosyncratic as its surroundings,” he said.

“The project grew from the site and two very unique clients. These factors informed its orientation, massing and materiality and we like to think that it would not make sense on a different site.”

Jewellery Box was longlisted in the small interior category of Dezeen Awards 2020. This category was won by Sim-Plex Design Studio’s four-bedroom smart home in Hong Kong.

Photography is by Jacob Milligan.