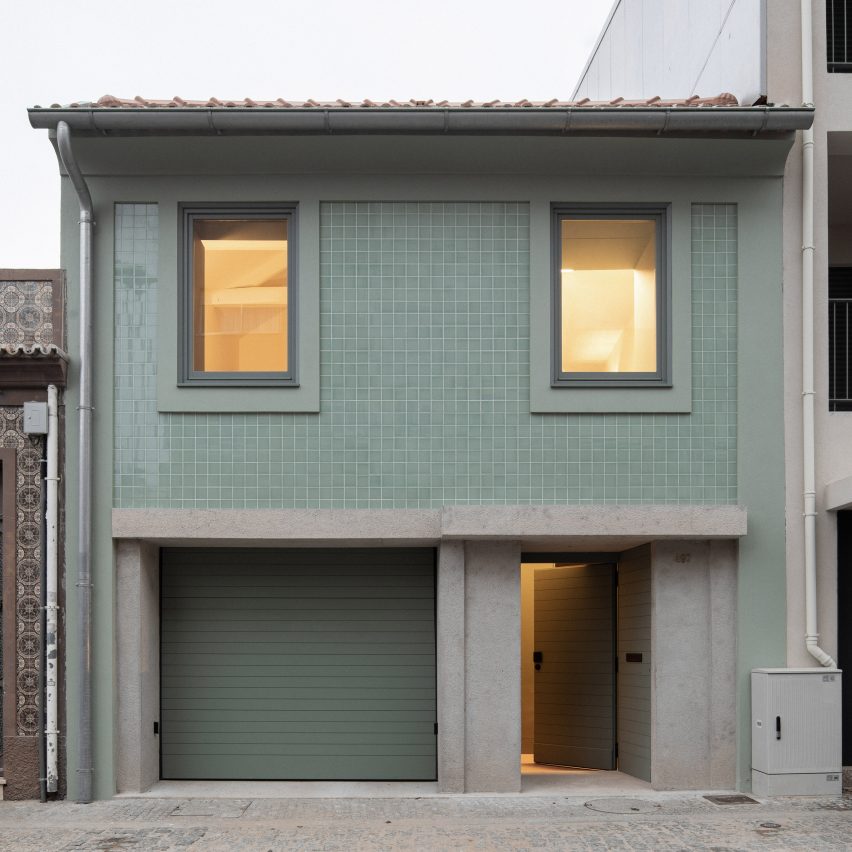 Porto-based DepA Architects has extended and renovated a traditional Portuguese home, streamlining its floor plan and adding a material and colour palette informed by its original design.

The studio renovated the home, located in the northern district of Porto, to better make use of its over-compartmentalised floor plan and added a new extension at the back that orients the home around two gardens.

The two-storey home was updated with an exposed concrete and sage-green tiled-front that references that of the original structure.

“The small and preexisting house at Matosinhos’ city centre belongs to a group of resembling buildings that perpetuate the city’s memory and identity,” DepA Architects told Dezeen.

“In order to keep the memory of the households alive and maximise the plot’s possibilities, we kept the main building and created a new volume on the backyard that would turn to the inside around two patios.”

The original property, which sits amongst a row of traditional terraced homes, had a decorative tiled facade framed by bright green concrete panels.

DepA Architects updated the exterior with materials and colours that reference the original facade and complement its typical Portuguese surroundings.

The studio used sage green-tiles for the exterior, contrasted by exposed concrete beams that support the entrance of a new garage.

“The idea to take advantage of the long and deep plot by keeping the existing house and creating a new volume on the backyard suggested the configuration of elongated spaces that would organise in a path from the entrance,” said DepA Architects.

“This lead to a very flexible and open plan that maximises the relationship between the spaces and between them and the exterior patios.”

Several disjointed annexes had previously been added to the building, creating an over-compartmentalised plan with small rooms without natural light.

The studio instead opened up the interior and divided its garden into two courtyards with a new extension.

“The most important drive was to achieve the balance that gives the house its atmosphere,” said DepA Architects.

“By contaminating new and old interventions with the materiality we were able to keep a lot of its original identity while creating a contemporary house that maximises its relations with the exterior spaces still being flexible to the residents.”

On its ground floor, the home now contains a two-car garage, a kitchen, open plan dining and living spaces, a study space and a bathroom.

A long corridor leads from the front, which holds the garage, to the living spaces at the rear of the building in what used to be several annexes.

Ochre-hued concrete was used throughout the floors of the ground level, while board-marked concrete covers the walls and ceilings to unify the largely open-plan interior.

Portuguese chestnut wood adds warmth to the home and was used to cover doors and cabinetry.

The sage green hue from the exterior was carried through to the interior elements, colouring skirting boards, balustrades and exterior door frames.

The original garden was split into two courtyards. The first adjoins the dining room and incorporates dark wood decking, while the second at the rear of the property contains a pool, outdoor showers and seating build into an ochre concrete wall.

DepA Architects was founded in 2009 and specialises in creating works that reimagine and reorganises existing buildings.

Other houses built in Portugal include this angular home on a hilltop by Hugo Pereira, along with this home by Fala Atelier with candy-coloured accents.

Photography is by Jose Campos.