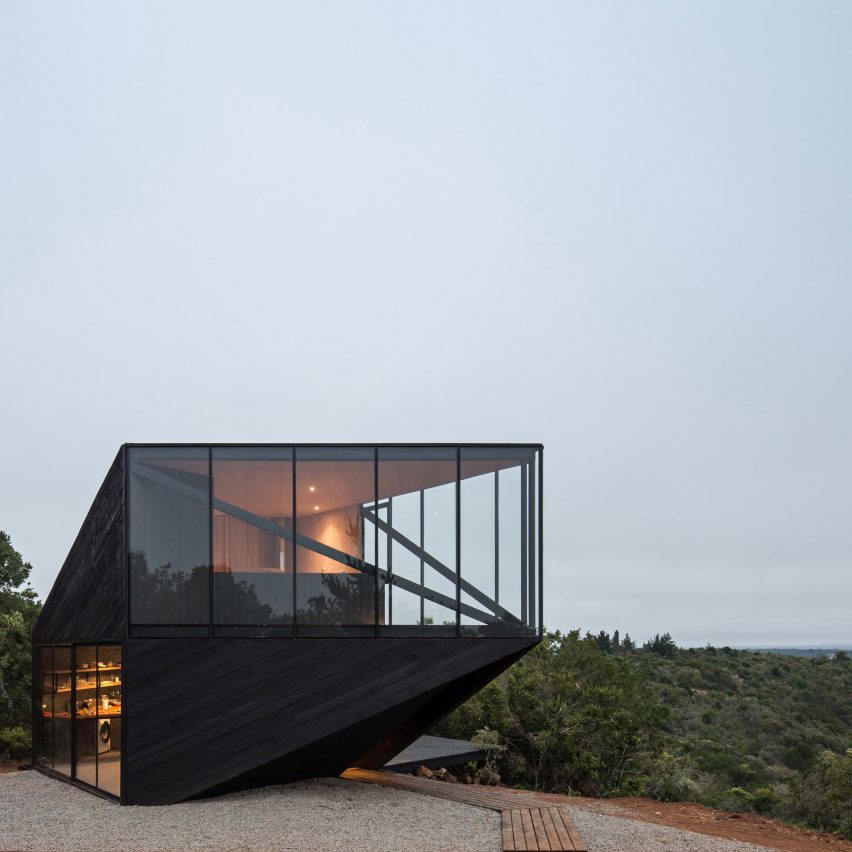 Santiago-based studio 2DM Arquitectos has built a holiday home overlooking the Pacific Ocean that has a cantilevered upper floor to take advantage of the views.

Built in a wooded area around 10 kilometres from the Puertecillo surf beach, the cabin has an angular form that was designed to give the owners sea views.

“The client’s requirement was to get the greatest possible view,” explained 2DM Arquitectos founder Daniel Diaz.

“In order to achieve that it was necessary to overcome the vegetation that existed between the house and the sea.”

The 57-square-metre cabin has a simple arrangement, with a kitchen and living space on the ground floor and a double bedroom and small bathroom above.

A cantilever supporting the bedroom juts out from the building towards the sea creating a form reminiscent of the bow of a ship.

“The shape, as a single, suspended volume points dramatically to the sea just as a ship would,” said Diaz.

“The public areas on the first floor allows you to be side by side to the surrounding nature with a more restrained look,” he continued. “The second floor, on the other hand, allows the viewer to see as far away as possible to achieve the desired Pacific Ocean views.”

The cabin was built with an angular steel frame that has bracing to support the cantilever and has been clad with timber painted black.

Within the cabin, the interiors are simply furnished, with full-height windows in both the kitchen and bedroom to take advantage of the views.

The kitchen is divided from the living space, which is arranged around a wood-burning stove, by an angled countertop that doubles as a dining table.

To continue the exterior aesthetic the kitchen’s cabinets were made from slatted timber that was also painted black.

Previous cabins on Dezeen include a modular structure with a steel frame and sheet metal walls designed by Lithuanian studio ŠA Atelier and a black-painted cabin elevated on a single column in a Finnish national park.

Photography is by Nicolás Saieh.