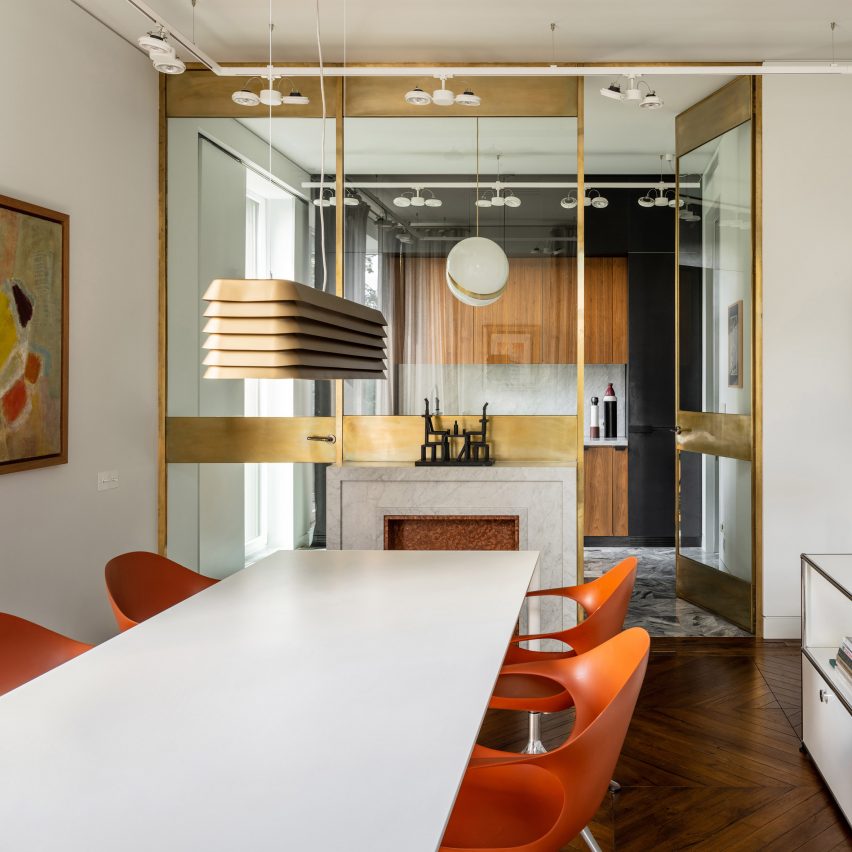 Russian practice Blockstudio has mixed different materials, textures and time periods within this new-build Moscow apartment to create the feeling of a lived-in Parisian interior.

Located in a quiet downtown area of Moscow, the 208-square-metre apartment is on the third floor of a modern residential building overlooking the city’s winding old streets.

The owners – a young family of four – found the views reminded them of a 19th-century apartment they lived in while in Paris, which boasted high ceilings, classic mouldings, parquet floors and panoramic windows.

Consequently, when it came to redesigning the interior, they called upon local firm Blockstudio to recreate the ambience of their much-loved holiday home.

“The modern architecture of the building did not lend itself easily to recreating the stylistic elements of a Parisian flat,” the studio told Dezeen.

“Therefore, we proposed to make an interior that would not refer exactly to its location but instead reference the layering and variety of different textures and materials typical of Parisian interiors.”

“Parisian style in interior design is special and unique,” the studio added. “There are centuries-old traditions combined with bohemian chic, stucco ceilings with modern furniture – and all this is shrouded in charm.”

Brother-sister duo Ivan and Natalia Trofimov, who founded Blockstudio in 2009, selected a neutral palette of light colours and natural materials to allow the owners’ art and collectible design pieces to remain the focal point.

“We do not oppose materials and textures,” said the studio. “It is rather a game with different colours and the feel of materials.”

The design also mixes a variety of different eras and references. For instance, reclaimed oak parquet flooring from Italy is laid out in a custom pattern across the living and dining areas, while the brass-framed glass partition wall separating the dining room from the kitchen recalls mid-century design.

This glazed wall creates the feeling of a single space while simultaneously allowing the cooking area to be separated from the rest of the flat.

A marble kitchen island pierces through the partition wall, straddling both spaces and taking the form of a false fireplace within the dining room.

The two children’s rooms are also separated by a sliding partition that can be used to divide or join the spaces as needed.

While many of the furniture and lighting pieces throughout the flat come from the owners’ own collection, others have been sourced from Moscow’s AlinaPinsky Gallery for contemporary design.

Design practice Biasol had a similar goal to Blockstudio when designing the interior of a home in Melbourne. By placing a plant-filled light well at its centre and applying French-style wall panelling to the corridors, the Australian studio wanted to evoke the romance of a classic Parisian apartment.

Photography is by Mikhail Loskutov.