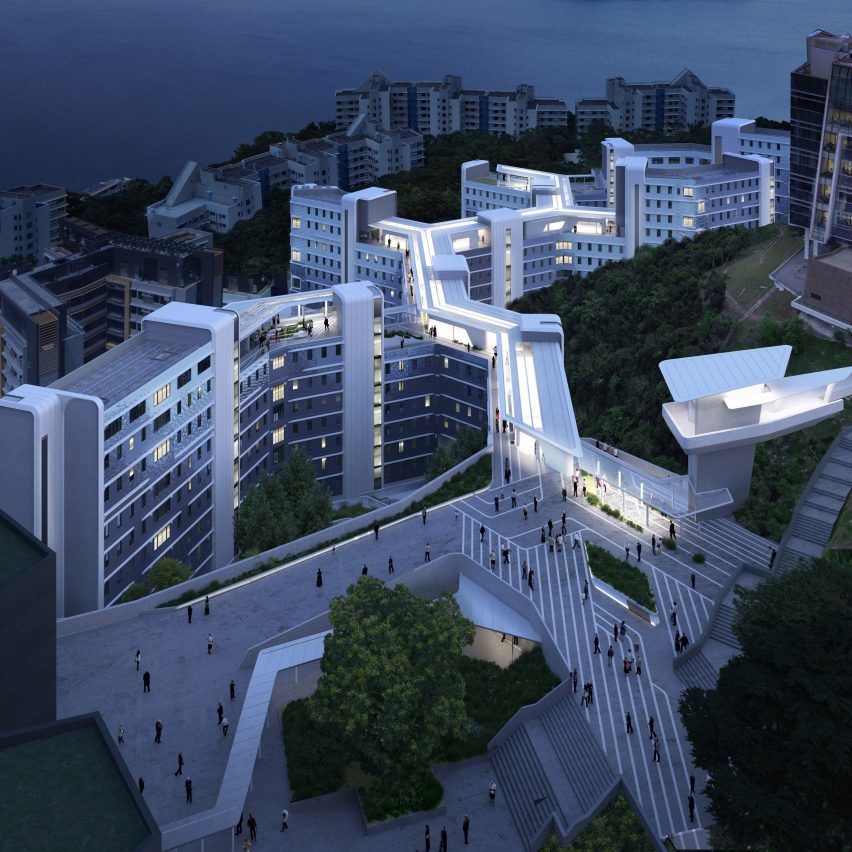 A rooftop walkway will form the main circulation route for the Student Residence Development at the Hong Kong University of Science and Technology, which Zaha Hadid Architects and Leigh & Orange are developing in Clear Water Bay.

Set to be built on a steeply sloped site to the southeast of the Hong Kong university’s campus, the hexagonal-shaped accommodation will accommodate 1,500 students within 35,500-square-metre building.

The folded form of the student housing was designed by Zaha Hadid Architects and local studio Leigh & Orange as a series of blocks with heights varying between six and eight storeys.

Each block will be linked to its neighbour, as well as some existing university buildings, via a shaded 200-metre-long rooftop walkway that was desighed to improve circulation and movement across the hilly site.

“The new building sits on a sloping site spanning approximately 25-metres of level difference from the base to the top,” explained the design team.

“The building’s roofline has been designed as its primary circulation and incorporates shaded outdoor areas for students and staff to rest and gather together, helping to build a stronger cross-campus culture.”

In an attempt to minimise waste and construction time for the Student Residence Development at the Hong Kong University of Science and Technology (HKUST), the studios’ design utilises prefabricated facade panels and washrooms.

The facade modules, which will be clad in different colours of ceramic tiles, will incorporate insulation and solar shading above the windows to maximise thermal comfort.

Inside there will be three different types of accommodation, named the Linear Cluster, V-Cluster and Y-Cluster. Each one will support co-living and contain a different number of bedrooms, bathrooms and communal spaces.

The Linear Cluster is the smallest accommodation type, with bedrooms for 18 students, alongside an open plan living area and kitchen that can be subdivided by partitions.

The Y-Cluster apartments accommodate 27 students and will have study areas, a lounge and kitchen, while the V-Cluster will house 36 students and feature a double-height living space, study lounge and dining-kitchen area.

Once complete, the hexagonal layout of the residences will also create space for four courtyards and ensure each room will have views out to open outdoor spaces.

Among the courtyards will be the Zen Garden – a “buffer” between the student halls and staff quarters – and terraced “wellness courtyards” for activities including farming, exercising and picnicking.

“The overall landscape design aims to promote and provide opportunities for active and healthy lifestyles, recreation and exercises, and active space for social interaction and gathering,” explained the studios.

“The vistas from the student rooms are animated by all these activities with landscape and greenery as the backdrop.”

The Student Residence Development at HKUST will be complete with photovoltaic panels on the inaccessible parts of the roof.

A centralised heating, ventilation, and air conditioning system powered by an intelligent building management system will also feature, helping to minise energy consumption and support the university’s commitment to becoming carbon-neutral in operation.

Zaha Hadid Architects and Leigh & Orange were commissioned for the Student Residence Development at HKUST to accommodate the recent growth of the university, which has increased demand for student residences. It is currently scheduled for completion in 2023.

Elsewhere in Hong Kong, Zaha Hadid Architects is also developing a skyscraper for a site alongside the Bank of China Tower by IM Pei and the HSBC building by Foster + Partners. It is reportedly the most expensive site in the world.