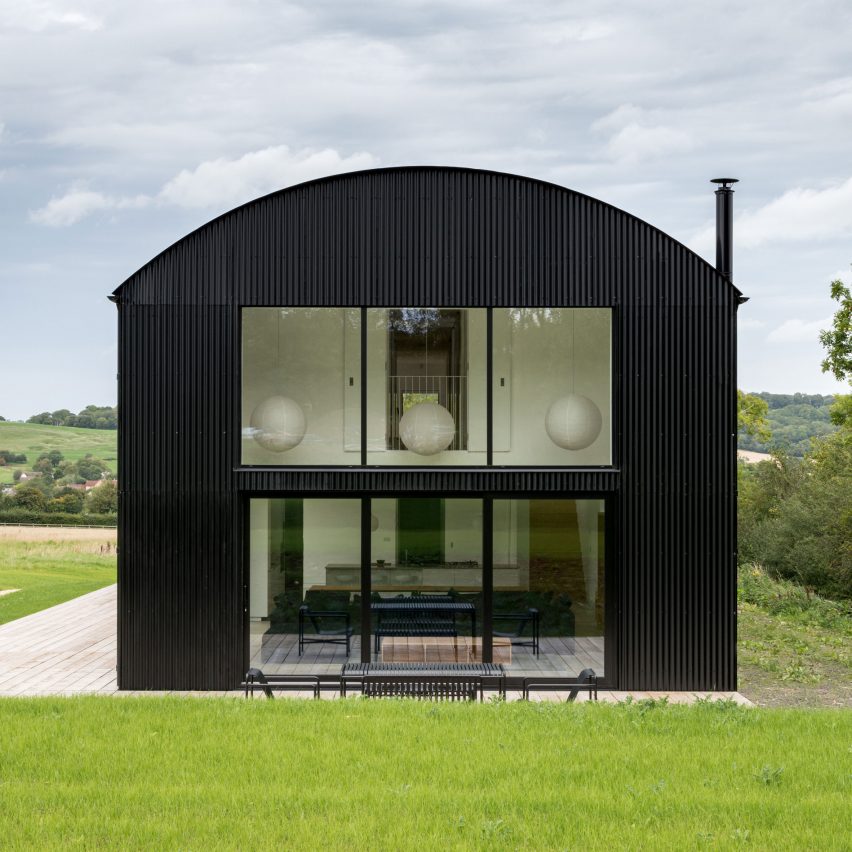 Architect Carl Turner has teamed up with creative agency Accept & Proceed to transform a Dutch-style barn in the English countryside into a holiday home with a difference.

DUT18 is a seven-bedroom retreat in the Cotswolds that facilitates wellness retreats and creative workshops, as well as family stays.

Turner’s studio, which recently rebranded as Turner Works, created the venue by taking apart an old shed and putting it back together with a new steel cladding and internal layout.

Accept & Proceed founders David and Laura Johnston initiated the project after attending The DO Lectures, an annual event in Wales that brings together creatives from around the world.

“I was inspired to create a similar space where creatives and pioneers could get away from it all – refresh, rethink, rewire – in order to tackle the huge problems, we face as a society,” said David.

At the same time, they wanted to create a versatile space that could also accommodate other activities, from yoga retreats to workshops with children and families.

“Laura and I live in London, so we conjured up DUT18 to give us what we don’t get in the city,” David explained.

“As a family, it’s an amazing place to go and spend time together, share experiences and explain to the kids our place in nature. As the leader of a studio, it’s a great place for the team to connect and talk about our plans for the future.”

Turner’s design sees the shed become a two-storey, 275-square-metre house, with an open-plan ground floor that is large enough to be used for a wide range of activities.

There is one bedroom on this lower level, accessible for guests with limited mobility, plus a further six upstairs. There are also four bathrooms, plus a first-floor lounge, ensuring that guests can find privacy and comfort when they want it.

Corrugated steel clads both the walls and the roof, giving a clean matt black finish to DUT18’s exterior.

“Corrugated steel lends a rhythm and texture to the 23-metre long elevations and curved roof,” said Turner. “It unifies the facade and roof, simplifying the overall volume, and reducing the appearance of the barn to its purest form when seen from a distance.”

The new window opened have been made as large as possible, to take full advantage of the views and allow ground floor rooms to extend out into the landscape.

“Facade openings have been positioned and sized to respond to the barn’s new use as a living space, giving the overall building a human scale,” added Turner.

This industrial materials palette continues through the living spaces, creating spaces that be easily adapted.

Furniture pieces are custom made from durable Douglas fir, with some mounted on castors for easy mobility. There’s also a grey wool curtain that can be used to subdivide the ground floor space.

Turner has previously worked on a variety of both housing buildings and workspaces for artists and designers. These include a barn conversion and extension project of his own and the Peckham Levels development.

This experience, plus the fact he previously designed David and Laura’s home, made him the obvious choice for this project.

The architect is currently working on further additions to DUT18, including a children’s play area made from repurposed components and a series of external sleeping pods.

There are also plans to install a wildflower meadow and a series of meditative walks, as part of a collaboration with designer and environmentalist Julia Watson.

“I feel we are in a time of great revealing, where everything is being unearthed but there is no new story to replace it,” added David.

“Workshops at the barn will hold a space to shape a new vision and be connected to others who are also looking for a new story and a better way. It’s really a magical place to help create a better future.”

Photography is by French + Tye.