An old brick carriage house sits at the heart of this newly built Brooklyn hotel, part of a chain with roots in Europe, which features interiors by Ennismore Design Studio. 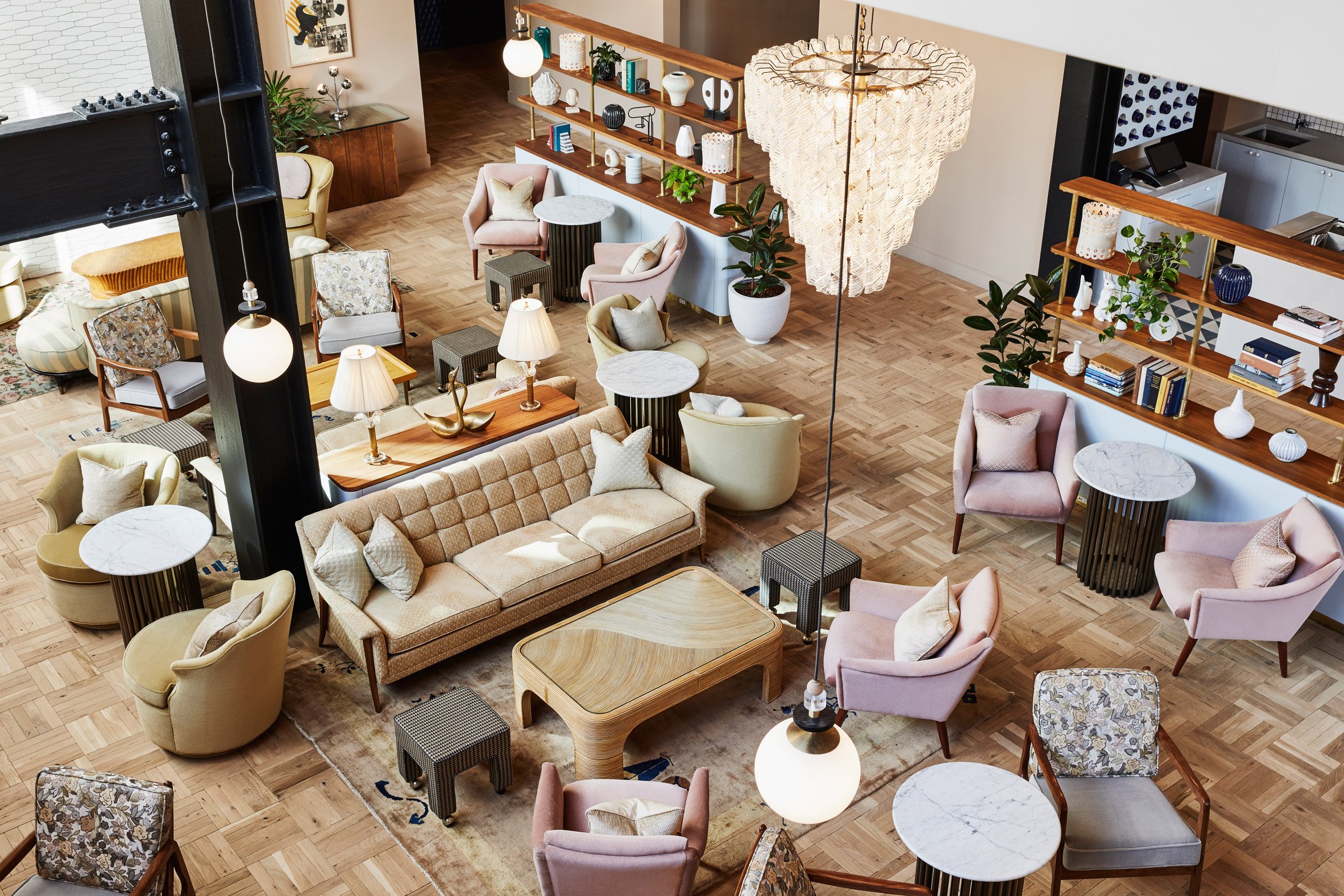 The latest outpost of The Hoxton, an enterprise that started in London’s Shoreditch in 2006, opens this month in the Williamsburg neighbourhood of the New York borough. 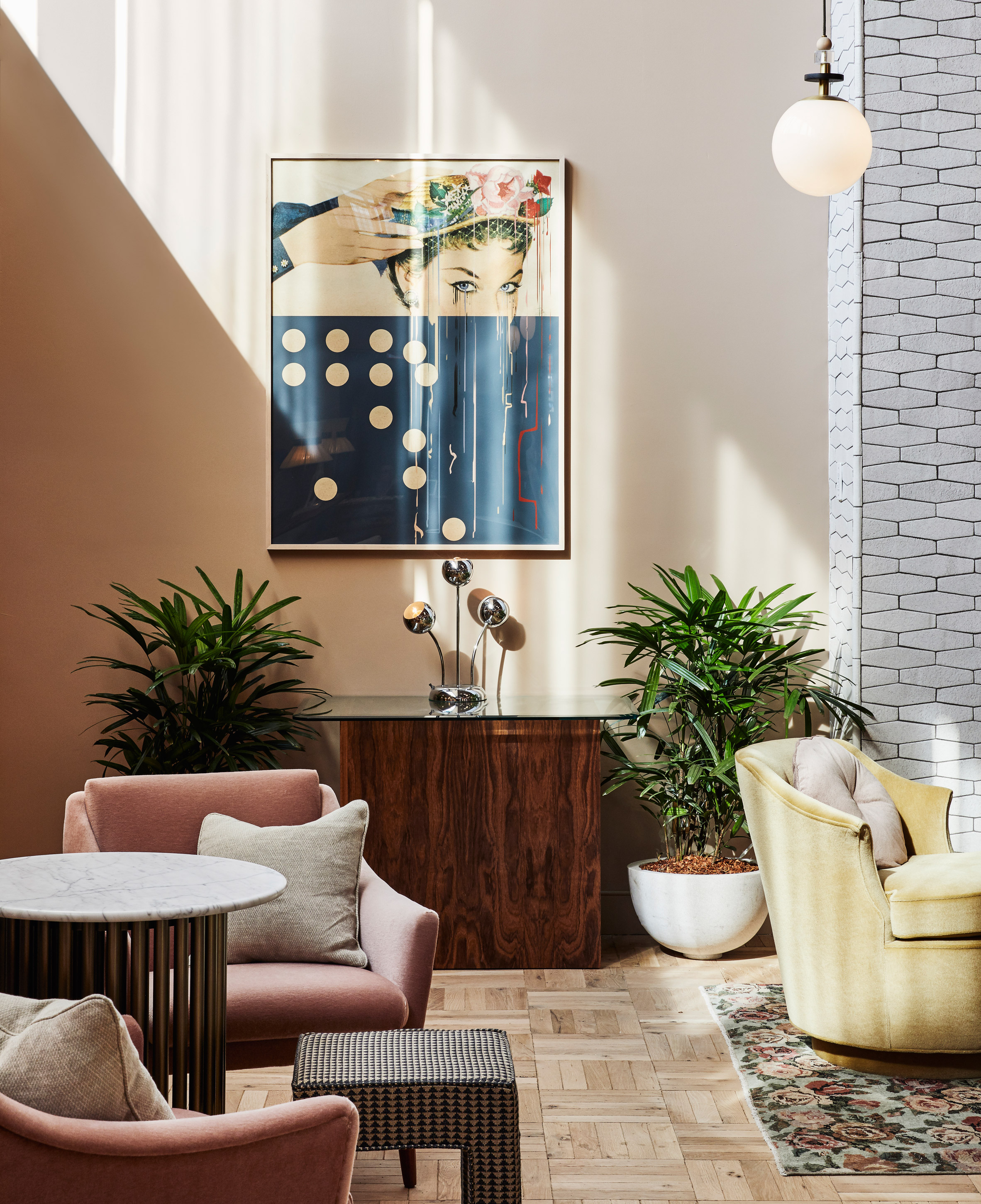 It takes over the site formerly occupied by the Rosenwach Water Tower Factory, which built the thousands of water towers that dot the New York skyline there from 1924 to 2009, when Rosenwach sold the site after a fire. 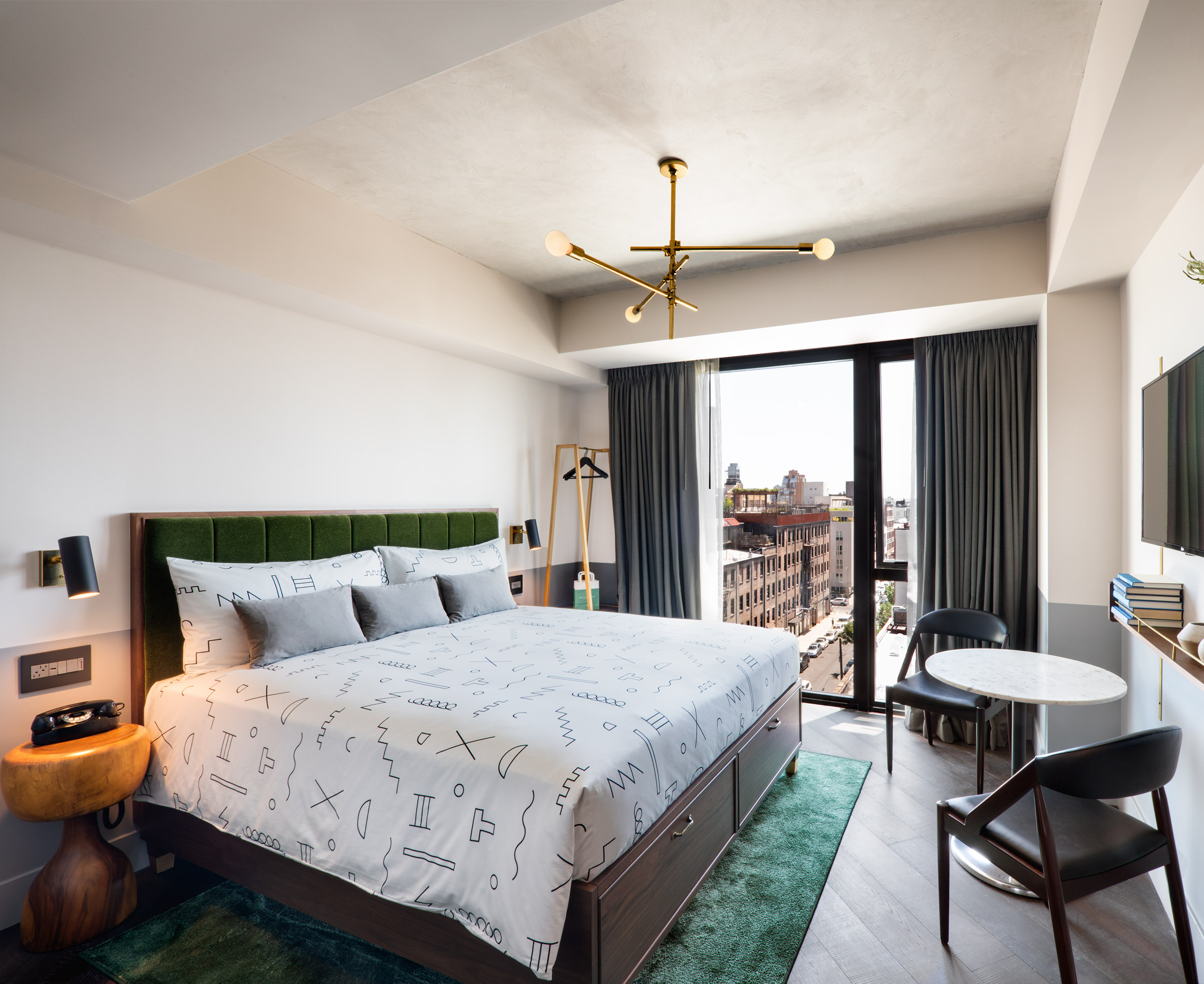 A historic brick structure that formed part of the industrial complex was incorporated into the new building. The shell, punctured with arched window openings and a large doorway, provides both a focal point in the tall lobby and an enclosure for the main restaurant kitchen. 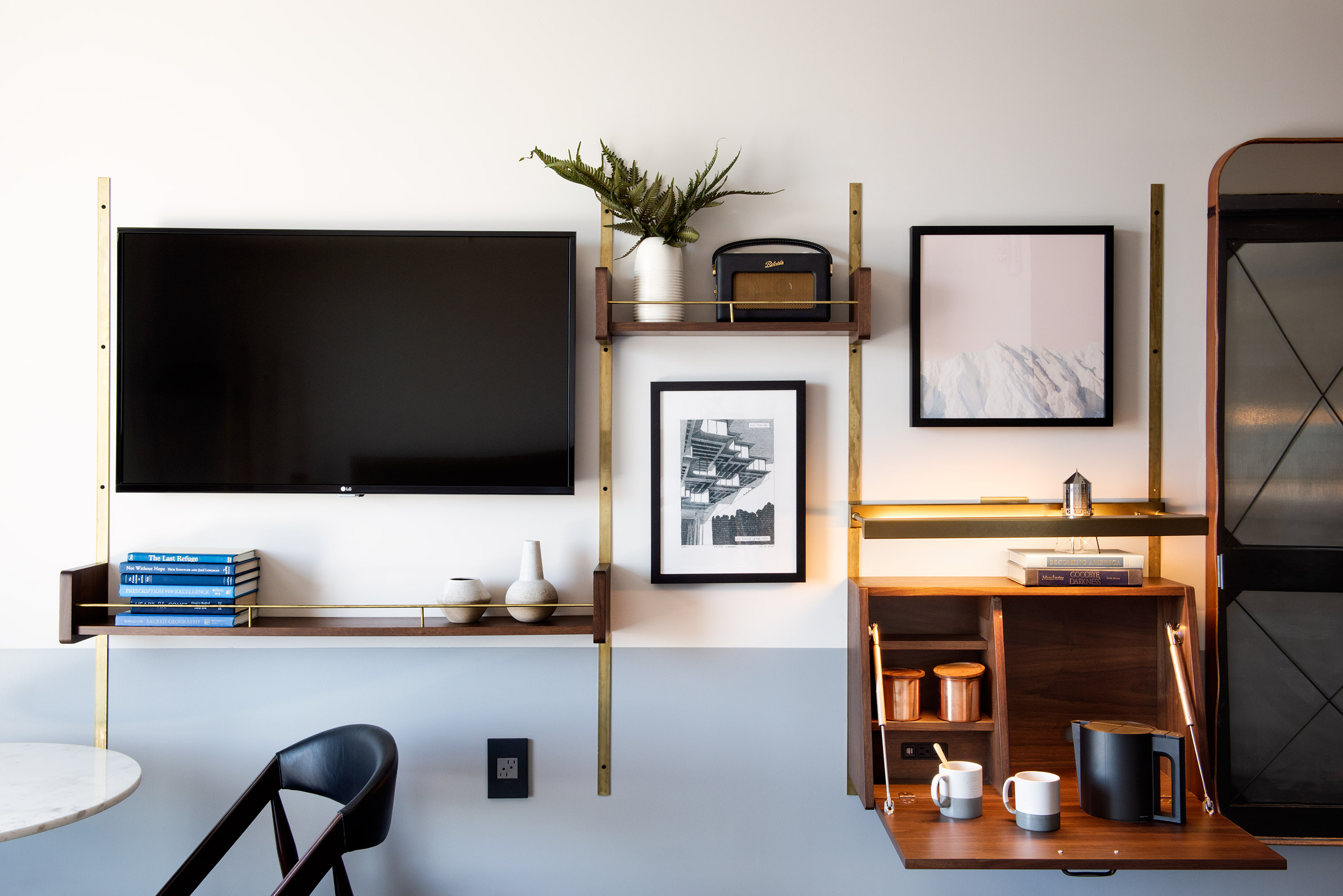 “The main restaurant, Klein’s, offers Americana-inspired classics throughout the lobby and brasserie-style restaurant from morning until late,” said a statement from Ennismore, which developed and operates the 175-room hotel. 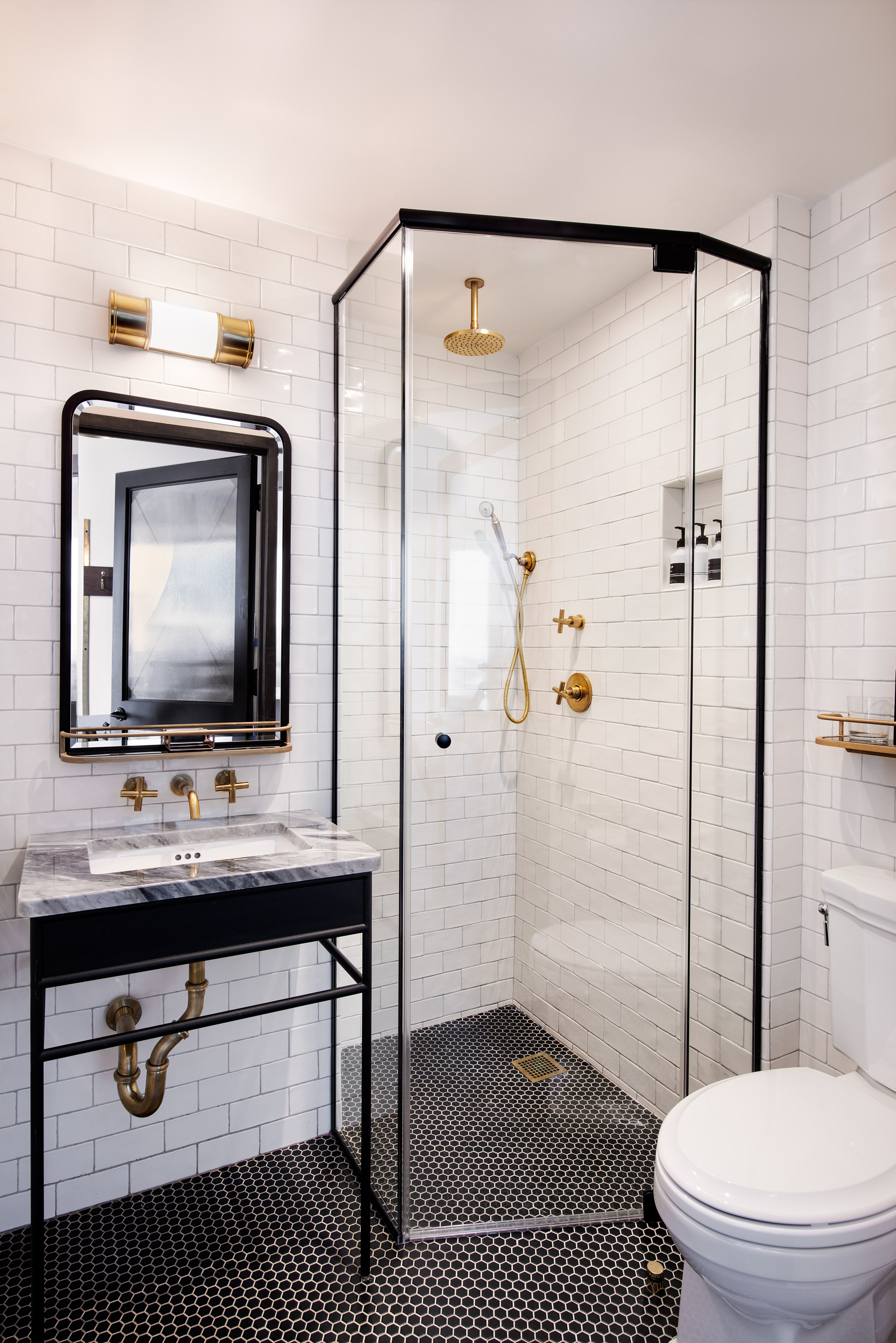 “A stunning Klein-blue French Molteni cooking suite and wood-fired grill situated inside a recreation of the original brick carriage house that anchored the site of the Rosenwach Water Tower Factory add impact to the space as a central feature in the open-plan restaurant.” 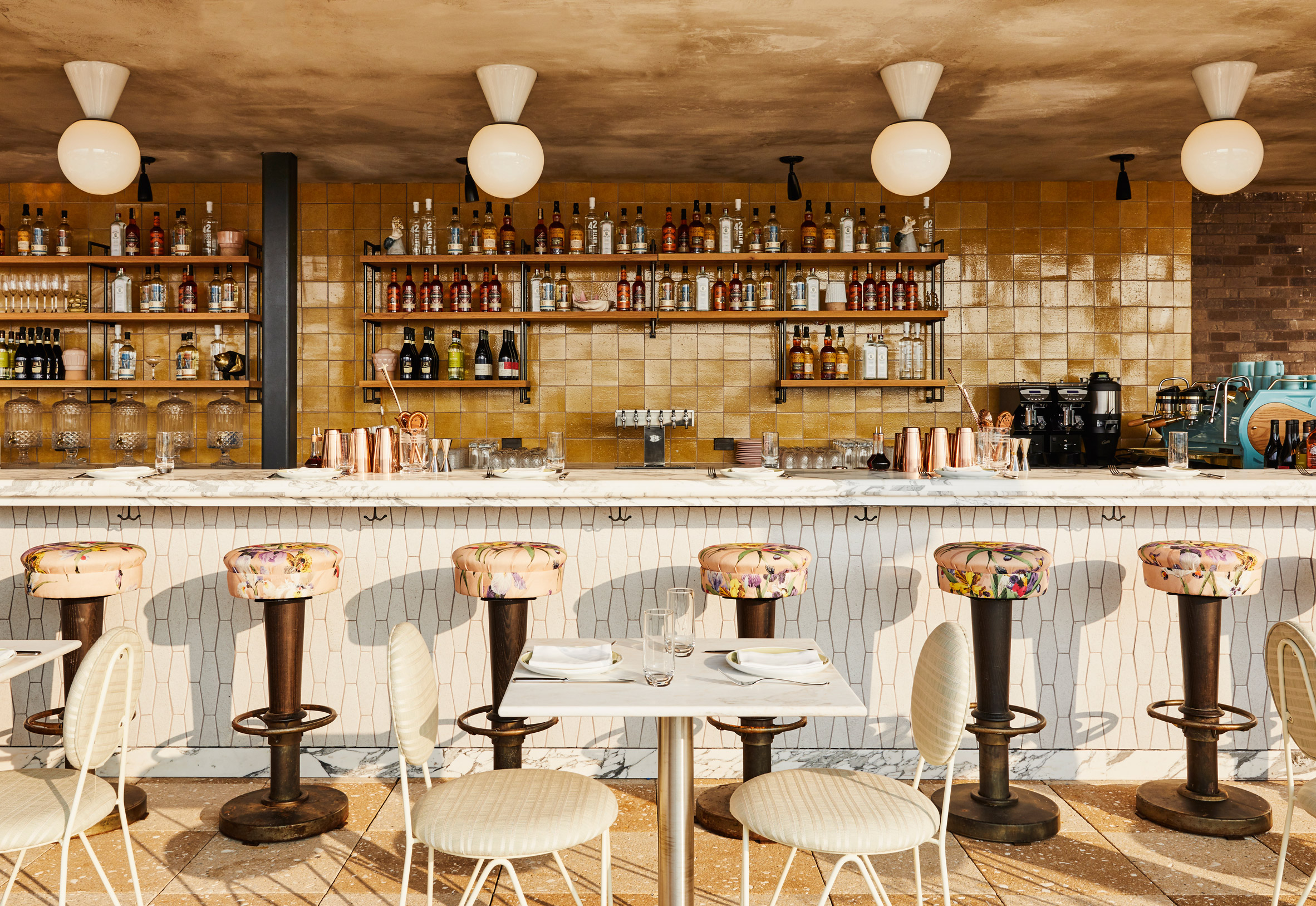 Ennismore’s in-house design team was responsible for the interiors of the 175-room hotel, and worked with hospitality group Soho House on the public spaces.

In the lobby, the mid-toned parquet floor is scattered with light-coloured furniture. Huge steel columns and beams are painted black to contrast, and other features include a wall of white tiles and dark wood shelving partitions. 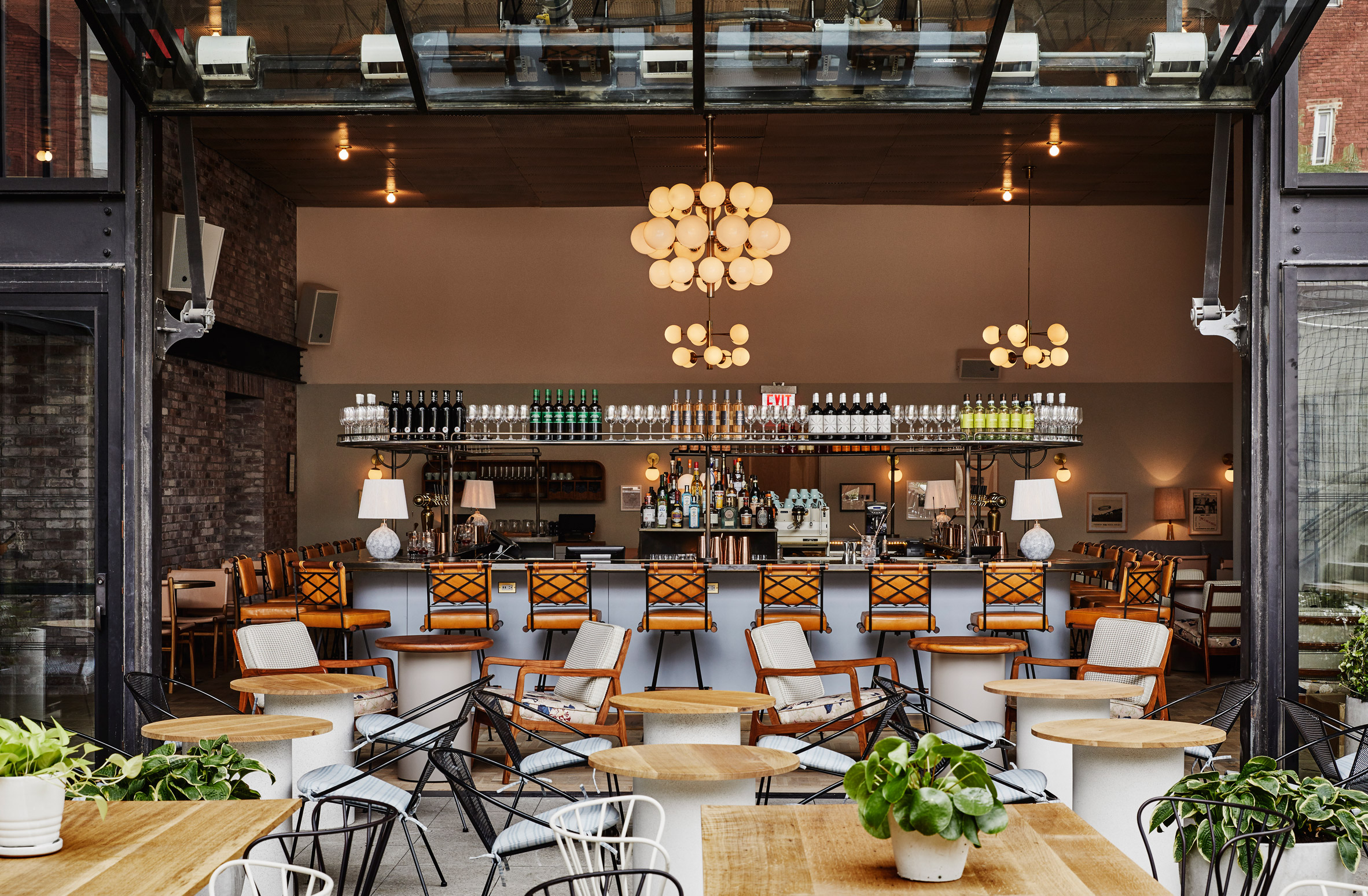 The second of three restaurants, Backyard, occupies an outdoor mezzanine where guests can relax on sun loungers or play ping pong.

Finally, the Summerly eatery can be found on the roof. Glass walls fold up to open the indoor bar to the terrace, which acts as a dining area, and “offers unbeatable views of the Manhattan skyline and brings East Coast summer vibes to the middle of New York City”. 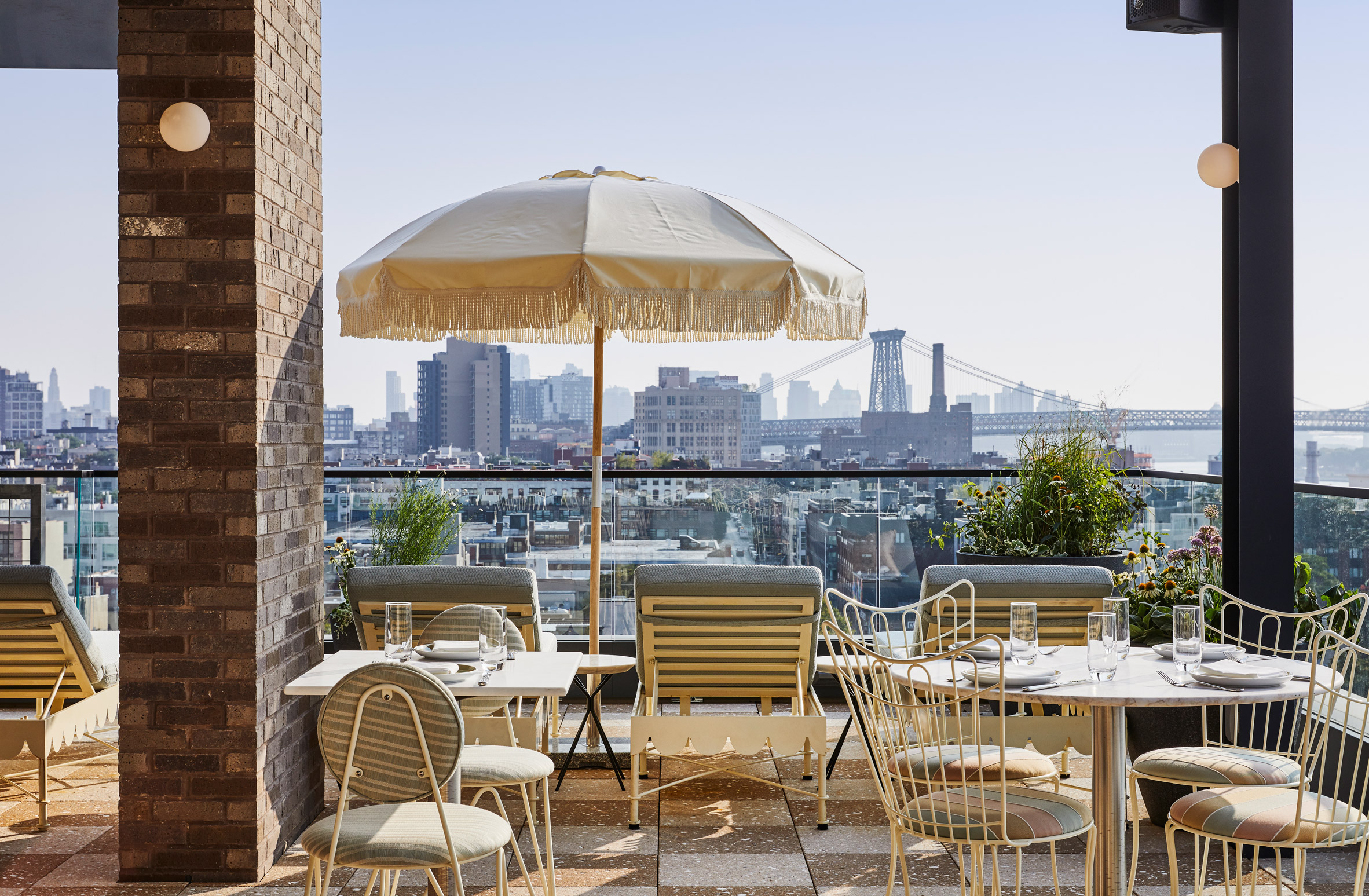 Ennismore Design Studio also completed the guest rooms, split into three categories named Cosy, Cosy with a View, and Roomy. All with king-sized beds, the rooms include brass fixtures and details, raw concrete ceilings, and mohair headboards in sage green, port and navy. 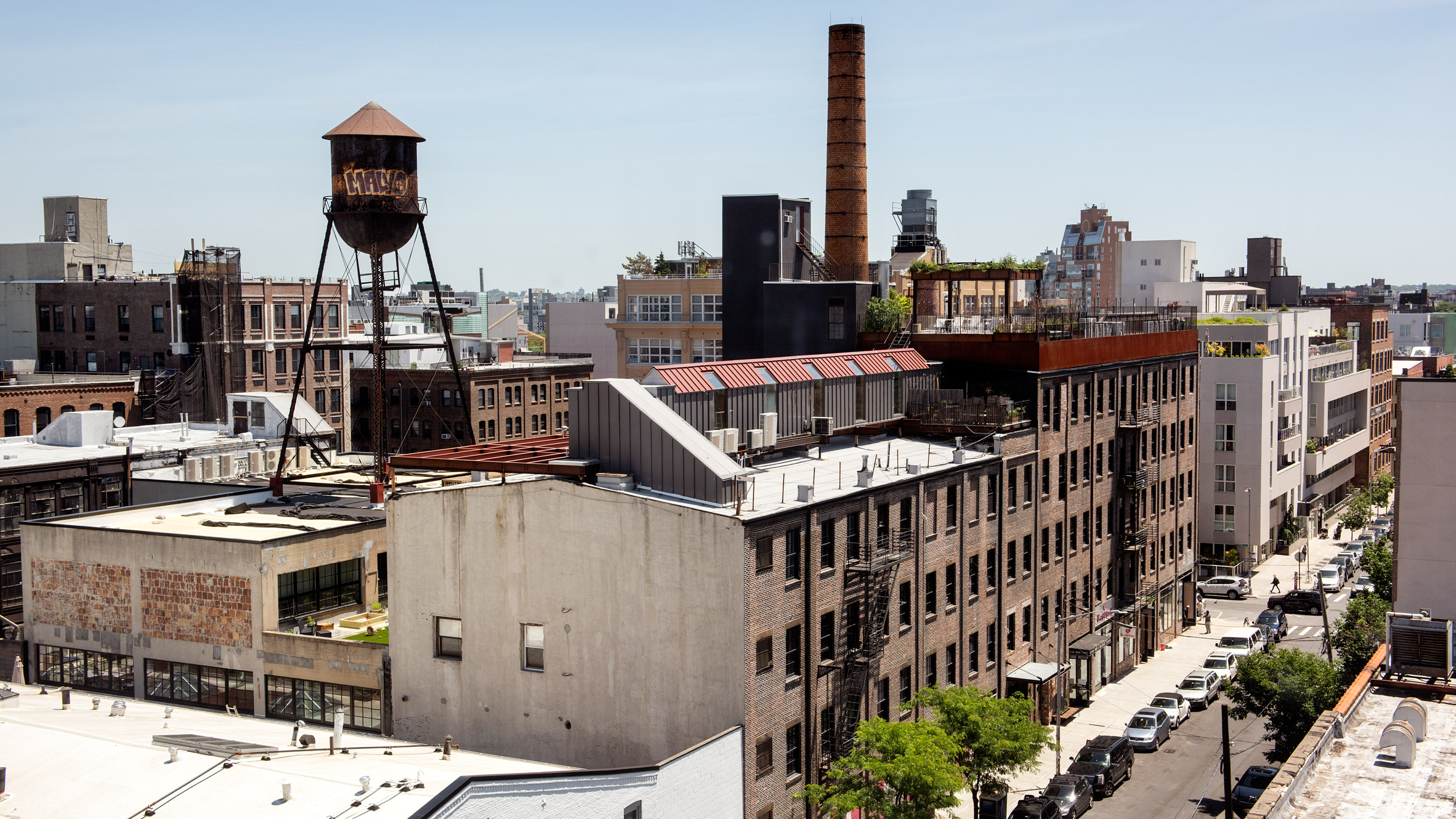 The hotel also has a private events space called The Apartment, which includes several different-sized spaces that can be hired for meetings and presentations, or parties. All have access to a communal kitchen. 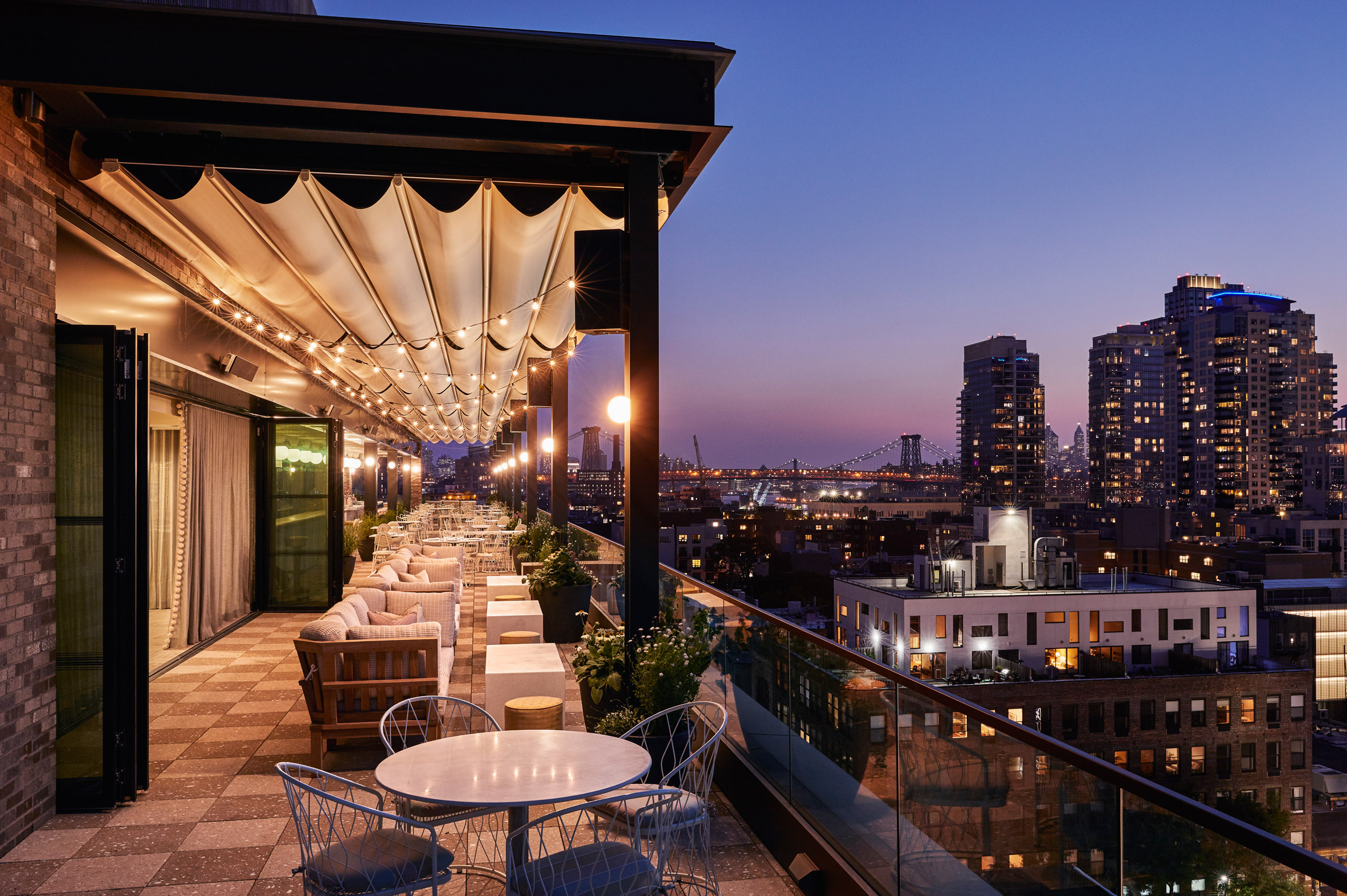 As well as its original location in East London, The Hoxton has properties in the Holborn area of the UK capital, Amsterdam, and Paris. The company also plans to open in Portland, Oregon; Downtown Los Angeles; and Chicago as part of a major US expansion.

The post The Hoxton crosses the pond and opens hotel in Williamsburg appeared first on Dezeen.