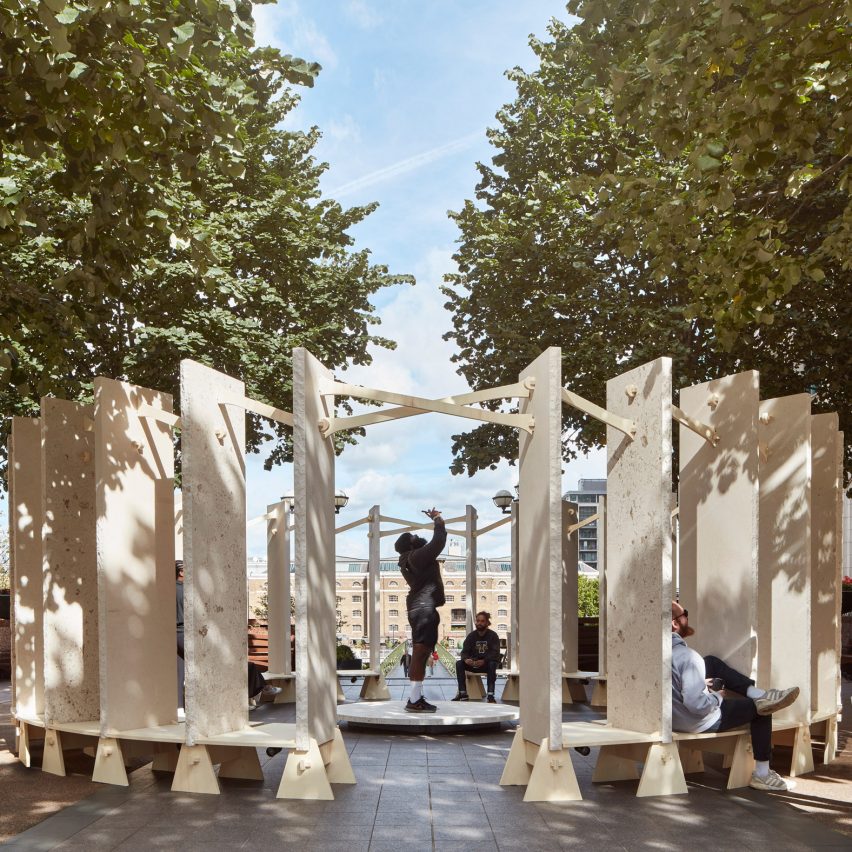 British architecture studio Stanton Williams looked to ancient and historical communal designs when creating Henge, a sculptural stone installation that is on display in Canary Wharf as part of London Design Festival.

These stand on plywood seats and have been slotted together by structural engineers Webb Yates using computer-cut pieces of plywood to form a circle overlooking a canal.

Stanton Williams worked with stone supplier LSI Stone, Webb Yates and design agency Experimentadesign on the project, which was designed and built in just six weeks and assembled like “a child’s toy”.

“We had to get a special, very small crane to lift the stone into place with all the trees around,” Stanton Williams co-founder Alan Stanton told Dezeen.

“They managed to assemble it so it all goes together – a little bit like a child’s toy.”

The way in which people surrounding a performer make “architecture with their bodies” was one of the main influences on the circular design, which Stanton hopes will be used both for performances and as a place to rest.

“We have a photograph taken from the top of the Centre Pompidou in Paris, looking down at the piazza, and you can see mime artists, flame throwers and sword-swallowers, and each one has a crowd of people around it,” Stanton said.

“And the shape of the crowd changes according to what the actors are,” he added. “So we were interested in the way that people make, effectively, architecture with their bodies around some kind of actor performance.” 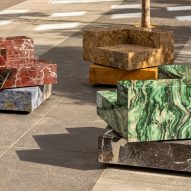 “We thought, let’s do the most simple thing, a circle, which is the Shakespearean O – the wooden O, which a lot of 17th-century theatres were built around,” Stanton said.

In another nod to its theatrical references, Henge also has a small round stone “stage” at its centre, which the studio hopes will encourage people to take part in communal activities in the circle.

Stanton Williams also drew on the ancient design of Stonehenge when creating the installation.

“Stonehenge has a tremendous kind of permanence about it, so we were quite interested in that and of course, it suggested the idea of a circle,” Stanton explained.

“The use of stone immediately suggested not only Stonehenge but also one of the 130 henges that are all over Europe, mainly in the Celtic countries – in Britain and in Brittany in France,” he added.

“They built these circles, and nobody knows what they were for – except we know that the circle is a powerful, bringing-together kind of architectural shape.”

Henge will remain in situ at Wren Landing beyond the London Design Festival, until 20 October, after which it will be disassembled and recycled.

“The stone can very easily be returned and used for something else – paving or building material,” Stanton said.

“The timber base could be simply recycled but we thought it would be very nice if we could find a school that we could give it to; they could use it as their own little theatre space in the playground or similar.”

The photography is by Mark Cocksedge.