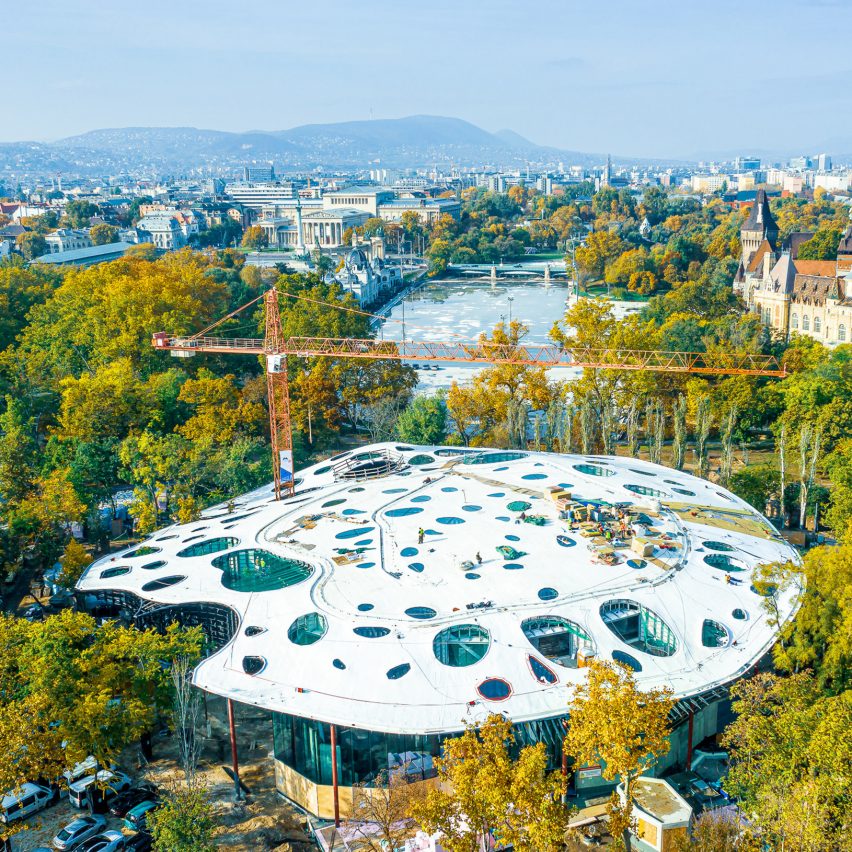 A museum dedicated to music topped with an undulating roof that will be punctuated by trees designed by Sou Fujimoto is nearing completion in Budapest‘s City Park as part of the Liget Budapest Project.

Named the House of Hungarian Music, the museum will contain a range of interactive exhibitions on musical history as well as venues for hosting concerts, a library and offices.

The 9,000-square-metre building is being built as part of the Liget Budapest Project, which will see several museums built within the Hungarian capital’s central City Park.

“It is incredibly inspiring to work in one of the world’s first public parks, and the task of designing the building was especially exciting since we not only created an edifice but also brought the park experience into the building,” said Fujimoto.

“The Liget Budapest Project, and within it the House of Hungarian Music, are a truly emblematic development project, which might serve as an example for future urban developers since it managed to create exceptional harmony between the green and the built-up environments.”

The music museum will be topped by a white roof punctuated with almost 100 holes for trees to grow through and wrapped in a wall made of glass panels.

“There are no right angles in the roof structure, almost no two elements that are the same,” said Fujimoto.

“It is all unique and the surface is punctured by close to 100 individually designed holes for the trees of the park to emerge through,” he continued.

“Moreover, one of the innovative solutions was also installed in these openings: the lightwells begin here, which channel the light right down to the lowest levels, thus helping to illuminate the interiors and create a unique ambience.”

The building will be divided into three clear sections, with the largely open ground floor set to contain two venues that will be used for musical performances.

The first floor, within the roof structure, will contain classrooms, a library, an archive of Hungarian pop music and office space. It will be connected to the ground floor by a feature spiral stair.

Below the building, the basement floor will contain the permanent exhibition on the history of music as well as galleries for temporary exhibitions and the sound dome – a hemispherical space that will be used for audio projections.

The structure of the House of Hungarian Music is now complete and the building is expected to open to the public in 2021.

It will be one of the first major completions of the Liget Budapest Project – a major overhaul of Budapest’s 122-hectare City Park – and will be followed by the SANAA-designed National Gallery of Hungary and the skateboard-ramp-shaped Museum of Ethnography designed by Hungarian firm Napur Architect.