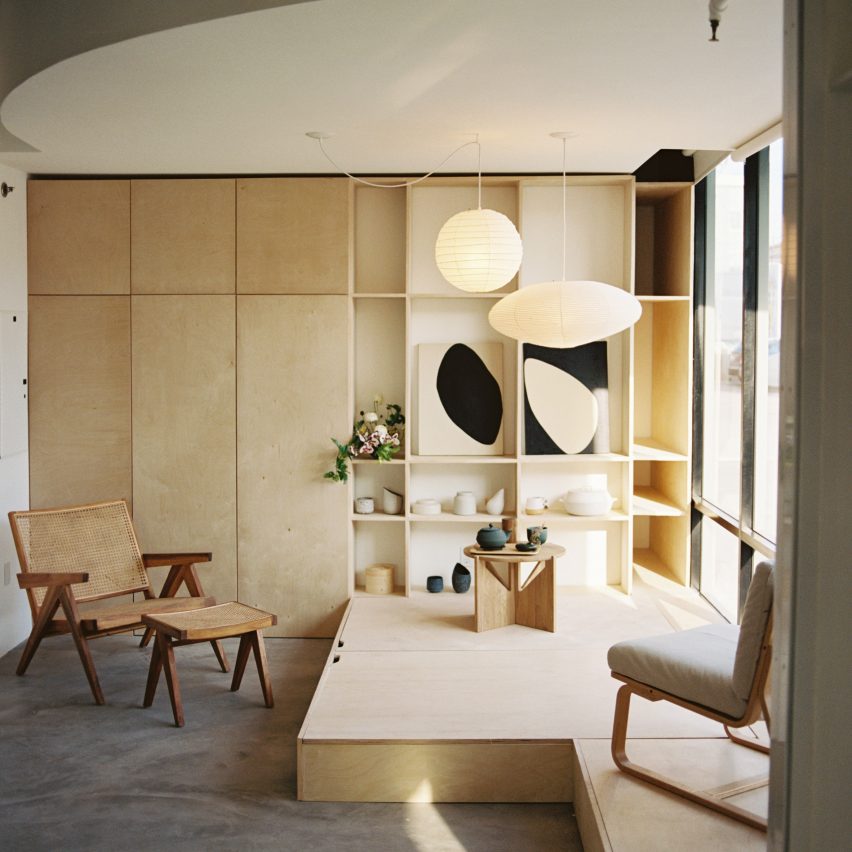 Architecture and design studio OWIU Studio has renovated an apartment in an old factory in Downtown Los Angeles, adding Japanese design elements to the industrial space.

Biscuit Loft is located in the Biscuit Company Lofts, a seven-storey factory built by a bakery company in 1925 that was converted into flats 15 years ago.

The Los Angeles firm renovated a 1,620 square-foot (493-square-metre) home on the ground floor of the building, extending the mezzanine balcony to create a tranquil home office.

“[We] created additional quarters and distinct uses for each room,” said OWIU Studio.

“The result is an apartment that merges Asian design principles with a downtown Los Angeles industrial edge, to create a comfortable living environment that inspires thoughtful daily routine and encourages a mindful lifestyle.”

At ground level, the apartment now has an open plan living area with the kitchen and dining area tucked under the mezzanine level, next to a guest bedroom and en suite.

The guest bedroom doubles as another contemplative living space, with a lot of Japanese-style built-in storage including integrated cupboards and shelving.

On the floor, raised platforms that can double as a bed frame with the addition of a mattress conceal more storage.

“The guest bedroom design was inspired by the simple Japanese Ryokan, a traditional inn and guest experience established in the 17th century,” explained OWIU Studio.

“The minimalist room is lined with tatami mats and will have a Japanese futon for when guests stay over the apartment,” it added.

“Its secondary use will function as a space for tea ceremonies and gatherings, as typical in a Ryokan, as well as a serene atmosphere for reading, creative brainstorming and resting.”

In the main living area, sofas and chairs are arranged at the far end, under a double-height space with large windows. Noguchi Akari pendant lights dangle over this lofty space, drawing attention to the high ceilings.

There is a small circular table for eating at, but Biscuit Loft’s main dining table is a large concrete slab that doubles as a kitchen island.

A sculptural wooden staircase that leads up from the ground floor with a guardrail that continues to wrap around the mezzanine, jutting out to form a geometric Juliette balcony by the home office area.

The designers used wooden pilotis to extend the mezzanine by 130 square feet (12 metres).

This intervention serves a dual function of creating extra space for a desk and reading area and creating a buffer zone before the main bedroom.

For the main bedroom, OWIU Studio added a new walk-in-wardrobe space alongside the en suite bathroom.

OWIU Studio decorated the loft space with neutral white walls and biscuity toned accents such as buttery blonde wood and furnishings in natural materials such as linen and rattan.

Industrial elements left over from its days as a factory, such as a large air vent above the mezzanine, have been preserved but painted over.

Textured render has been applied to the main bathroom walls for contrast, complemented by oxidised fixtures and fittings and a concrete sink.

OWIU Studio, which stands for The Only Way Is Up, is an architecture and design studio based in Los Angeles.

More Los Angeles interiors include a loft apartment in an old furniture factory by Stephen Kenn Studio and Enclosures Architects’ renovation of a 1930s flat by modernist architect Rudolph Schindler.

Photography is by Justin Chung.