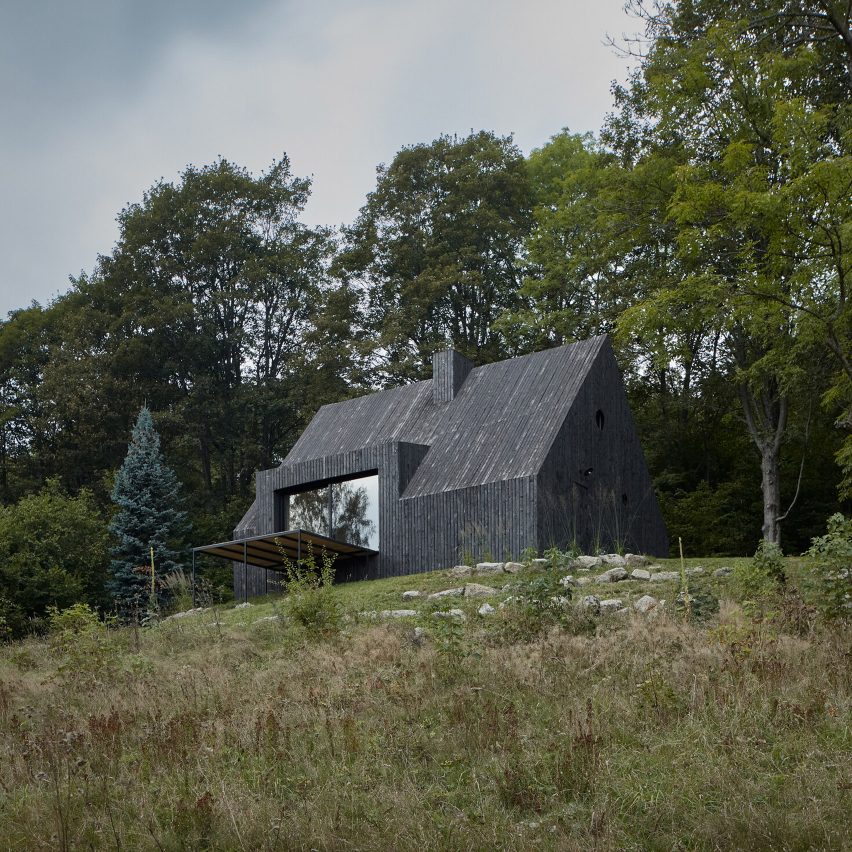 Charred-timber cladding covers the facades and roof of this cottage in the Czech countryside, which local studio Mjölk Architekti modernised by adding new openings and improving the layout.

The cottage is located near the village of Jiřetín pod Bukovou to the east of the city of Liberec, where Mjölk Architekti has its offices.

The clients owned an older cottage nearby that was too small for their living requirements, so they began searching for a more suitable property that would allow them to remain in this picturesque rural region.

This 1980s building occupying a woodland site on the slopes of the Horská Kamenice valley provided the necessary space in a good location, but was in need of significant refurbishment.

Mjölk Architekti was tasked with updating the cottage, both externally and internally, to create a modern home with practical living spaces that fits in with its natural surroundings.

The existing grey render covering the exterior was replaced with timber panelling, which the owners charred themselves using the Japanese Shou Sugi Ban technique.

This process of lightly burning the surface of the wood creates a carbonised layer that is waterproof, fire retardant and provides protection against insects.

The architects playfully explained that “the whole process [of charring the wood] took quite a long time, so we were afraid that it would have psychological consequences for the client.”

The panelling is applied across all of the cottage’s facades and extends onto the roof and chimney, resulting in a monolithic form that appears to be composed of intersecting geometric shapes.

Similar burnt timber cladding was used by Mjölk Architekti for a house near Prague, where it was chosen to reference the client’s love of cooking.

At the house in Jiřetín pod Bukovou, the architects also worked with photography studio BoysPlayNice to produce a playful series of images incorporating flames and smoke to capture the essence of the project.

“We always try to enjoy the photography process with the boys,” studio co-founder Jan Vondrák told Dezeen. “Sometimes we change into crazy costumes, other times we involve pets, this time we played with fire and smoke.”

The blackened facades are punctured by new windows, including a large glazed opening that replaced several smaller windows and provides a view over the landscape.

Circular windows on each of the gable ends add a quirky detail that the architects suggested makes the building “look like an overgrown birdhouse”.

The large opening in the front of the house incorporates a sliding door that opens onto a new wooden terrace raised above the sloping ground.

Vondrák explained that the terrace “is the best place to observe deer that often visit the garden and offers the most beautiful views of the landscape and the setting sun.”

Inside the building, the original layout was significantly altered to suit the needs of the new occupants. The living space remained in place but the ceiling was partly removed to create a double-height space that exposes the wooden rafters.

New sleeping areas have been created on the upper storey. One bedroom is accessed using stairs hidden in a closet and another, smaller bedroom is reached using a ladder from the kitchen.

A sleeping platform incorporated next to a window opposite the fireplace provides a spare bed for visitors.

Mjölk Architekti also designed a smaller cottage alongside the main house that contains a sauna and a guest bedroom. This building features a steeply gabled form with cladding and circular openings that match the larger cottage.

Jan Vondrák and Jan Mach founded their practice in 2008, claiming that their goal is to “create state-of-the-art architecture and make our clients happy.”

The studio’s previous projects include a barn-like gabled house in the Czech countryside that features living spaces reaching nine metres in height.

Photography is by Boys Play Nice.