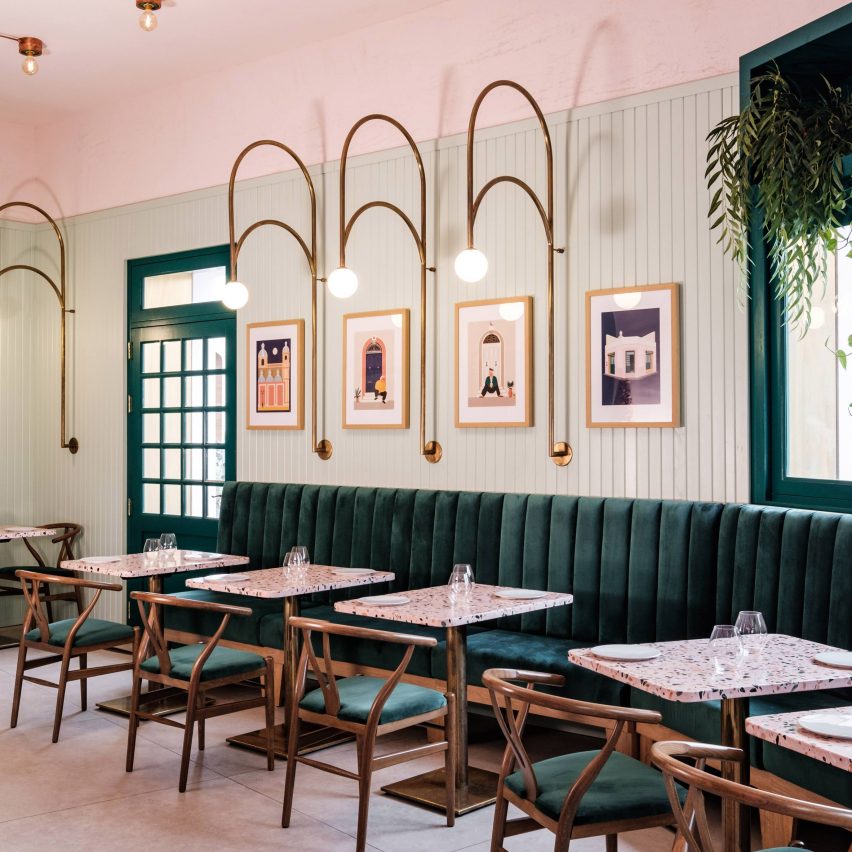 Serving a menu of modern Meditteranean dishes, Barbajean occupies a prominent corner property in the village of Dingli.

The quiet village sits at the highest point of Malta, and has uninterrupted views out across the ocean towards the uninhabited isle of Filfla.

Mizzi Studio‘s founder, Jonathan Mizzi – who is from Maltese – designed the restaurant so that it pays tribute to Dingli and its scenic landscape, but also “injects [the village] with new life”.

“Working within the village’s particular urban fabric was a key inspiration for us,” said Mizzi.”We wanted to create a restaurant that would stand at the core of a quintessential Maltese village experience.”

The baby-pink facade of Barbajean has been made to include architraves and coloured doors– two elements that Mizzi says can be seen on the exterior of a typical Maltese home.

Emerald-green timber doors have been built into the facade’s trio square openings. Each opening is surrounded by a chunky pink-terrazzo architrave, created by Maltese surface manufacturer Halmann Vella.

The pink and green colour scheme continues inside the restaurant. Rose-coloured terrazzo lines the wall behind the drinks bar, which has been punctuated with three arched niches.

Liquor bottles and glassware are displayed inside the niches, illuminated by neon-pink strip lights that have been installed overhead.

Rosy terrazzo has also been used to craft the surfacetop of the bar counter, the base of which is made from fluted timber that’s been stained green. Just in front is a row of pink high chairs with tubular brass frames.

A lengthy seating banquette upholstered in emerald velvet winds its way around the opposite side of the room, accompanied by pink terrazzo tables inlaid with flecks of Guatemala Verde marble.

Directly above are a series of prints by Maltese illustrator Ed Dingli, which depict quotidian scenes of life in the village.

In between the prints are custom-made light fixtures designed by Mizzi Studio, which feature curling brass stems and spherical bulbs.

Surfaces in this area of the restaurant are painted a pale mint shade, but another dining nook that lies towards the rear of the plan has been given a cosier feel with dark-green walls and wooden floorboards.

Mizzi Studio was established in 2011 and has offices in both London and Valletta, the capital of Malta. Barbajean isn’t the only hospitality space that the studio has designed – last year it completed works on The Serpentine Coffee House in London’s Hyde Park.

The venue boasts glass walls and a gold, undulating roof that’s meant to resemble the shape of a stingray.

Photography is by Brian Grech.