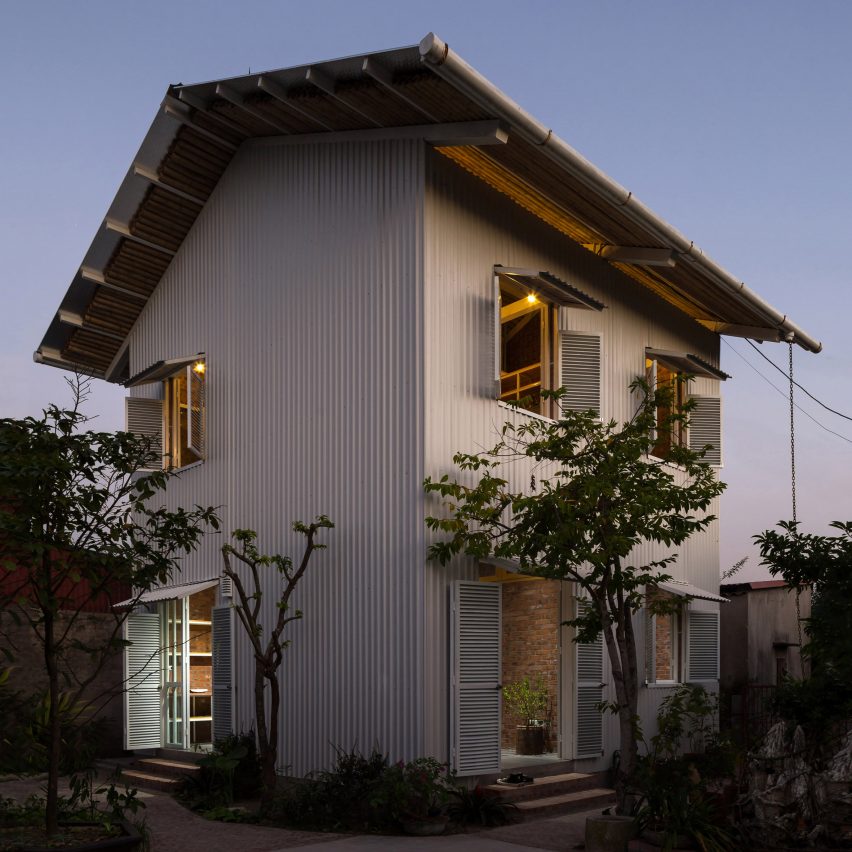 Vietnamese studio H&P Architects has completed a corrugated metal-clad house in the An Lai hamlet in Hai Duong, Vietnam, which features an open-plan interior and playful net floors.

The two-storey house, named HOUSE by the studio, was built for a new family on a plot of land opposite an existing building. To keep it as self-sufficient as possible, H&P Architects added solar panels on the roof.

These can produce twice as much electricity as necessary for a conventional household, according to the studio, and residual electricity can be stored or traded.

A rainwater tank provides water for the house, while filtered water from its septic tank is used for watering the garden.

The 75-square-metre building was constructed from a reinforced-steel frame made from pillars and beams that form a pitched roof and are visible in the interior. It was clad in an envelope of bricks and hardwearing, corrugated white metal.

The house was commissioned by a family where the son is getting married and is located next to the family home.

“They decide to have this house built for their son because the one they are living in is too small.”

Inside the house, the architect designed open-plan spaces and left the brick walls bare.

The interior was created based on the needs of the family and features a playful, open net-floor that allows air to move through the house and complements the gridded sides of the staircase.

“I decided to use steel, wood and bamboo for the interior as they are popular materials in rural areas in Vietnam,” Thanh Ha said.

“Void space play an important role in small houses and can be filled when needed to increase the usable area.”

“The nets inside present a solution that fits these two states – open and closed – bringing about fresh experiences to the house.”

The residence is a part of H&P Architecture’s HOUSE project, which stands for “Human’s Optional USE” and sees the studio design the frame of a house and then adapt it to its surroundings.

“As Human’s Optional USE is made of three components – frame, covering, furnishing – it can be used flexibly in areas of different climate patterns according to its owner’s need,” Thanh Ha said.

The buildings can be adapted for vulnerable areas, such as areas prone to flooding, and be built on steep ground.

“The frame allows lifting the foundation pillars to form a house-on-stilts for mountainous terrain, or spreading the foundation into a floating house supported by many barrels beneath over water,” Thanh Ha said.

Building these kinds of houses en masse could help save resources in Vietnam, he argued. “In order to save land and water area, the houses I have made have at least two storeys,” he said.

“If houses in Vietnamese rural areas – about 70 per cent of the population – are made in this fashion, Vietnam can save a lot of natural resources, thus promoting more sustainable development.”

The studio previously created the AgriNesture house in Mao Khe in the same way, but that version was adapted to have a plantable roof.

“Human’s Optional USE is the continuation of that way of thinking,” Thanh Ha said. “At the moment, I am working on another house in Ninh Binh but with different materials. I hope to spread more of this fashion in the future.”

H&P Architects previously also wrapped brick walls around the Brick Cave house in Hanoi, which was designed to make the residents feel close to nature.

Photography is by Le Minh Hoang.