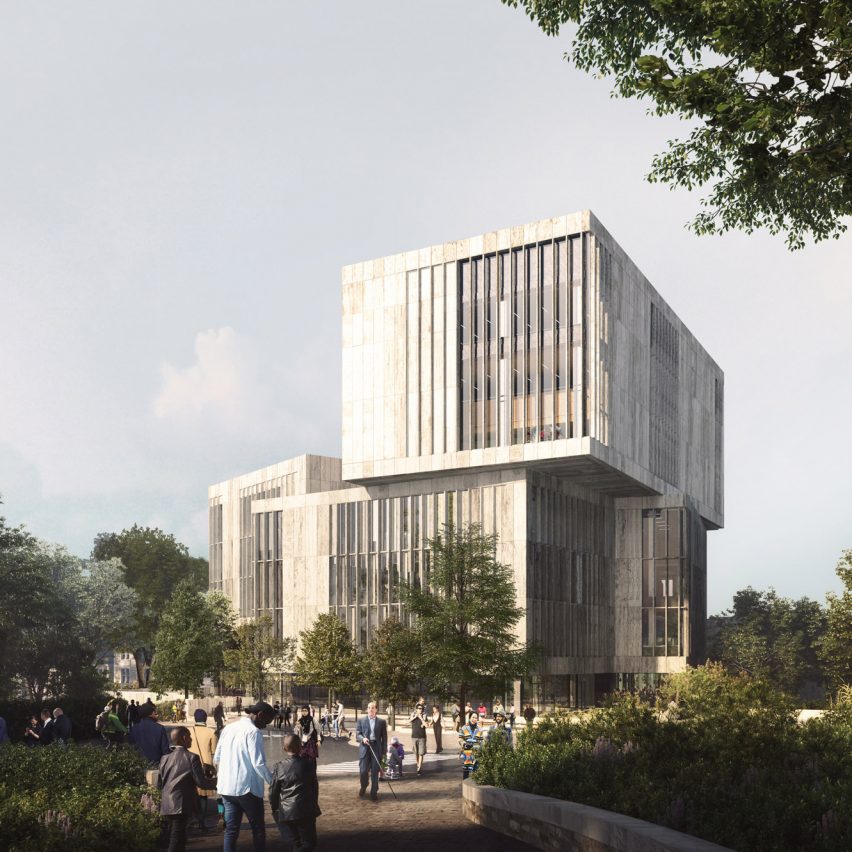 Architecture studios Hawkins/Brown and Schmidt Hammer Lassen have won planning approval for a blocky library building for the University of Bristol.

Set to be built on the university’s central Bristol campus, the 14,355-square-metre building will be known as New University Library.

The blocky library was designed to step up from the neighbouring residential buildings to the university’s Senate House building. As the seven-storey building will be visible across Bristol, it has been designed to be a landmark for the university and city.

“This inspirational new landmark for Bristol will provide world-class facilities in an inclusive and welcoming environment,” said Adam Cossey, partner at Hawkins\Brown.

“The new library building has the potential to transform the relationship between the University of Bristol and the wider city, extending a welcome to the public and acting as a gateway to the revitalised Clifton campus.”

Replacing The Hawthorns student accommodation building, at the corner of Elton Road and Woodland Road, the New University Library will contain 2,000 study spaces and 420,000 books.

The building will have a publicly accessible ground floor containing events and exhibition spaces along with a cafe and the University’s Centre for Cultural Collections.

Above this, the library will have a variety of study spaces arranged around a central atrium.

The library will be clad in limestone, with elongated windows designed to reference Bristol’s neo-gothic architecture that includes the nearby Wills Memorial Building.

“While we set out to create a contemporary design that echoes a sense of civic dignity imbued with timeless sculptural qualities, the new library is also deeply contextual and deliberately responsive to the historical environment of Bristol,” said Kasper Frandsen, partner at Schmidt Hammer Lassen.

“Having worked closely with the University’s stakeholders, the library provides archive space for priceless physical collections while offering a social platform for study, exchange of ideas, and meetings between people.”

As part of the development, the university plans to redesign the road layout to create a new square between the New University Library and the Senate Building. The library is set to open in 2026.

Other libraries by Schmidt Hammer Lassen include Christchurch Central Library and Scandanavia’s largest library in Aarhus, while it is currently designing Shanghai’s new city library.