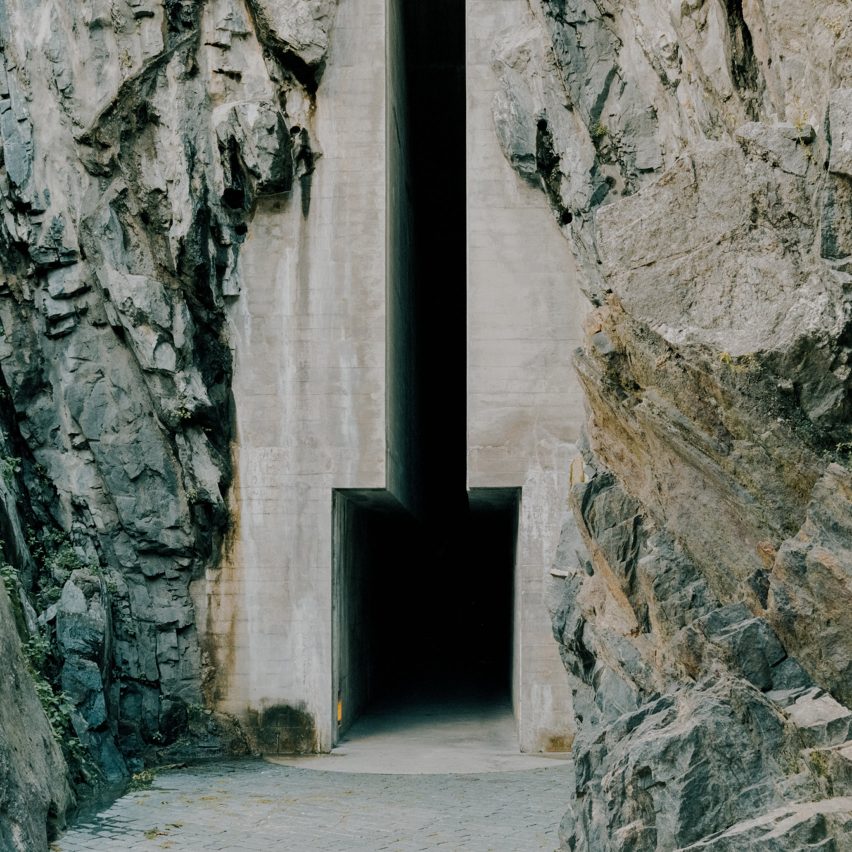 Swiss architect Aurelio Galfetti’s stark hillside entrance to the medieval Castelgrande in Bellinzona, Switzerland is the focus of this architectural photography series by Simone Bossi.

Captured on film, the series highlights the imposing qualities of the clean-cut, bunker-like gateway to the castle, which is described by Bossi as a “majestic” and “powerful space”.

Castelgrande is elevated on a rocky peak on the Alpine foothills and forms the centrepiece of the historic Castles of Bellinzona, a UNESCO World Heritage Site that also includes the Montebello and Sasso Corbaro fortresses.

Galfetti’s brutalist entrance to Castelgrande was carved into this hillside as part of a wider renovation of the site between 1984 and 1991, and is considered one of his most notable projects.

The gateway resembles a dark, cavernous void carved into the rocky hillside, and leads to a hidden elevator that takes visitors up to the castle grounds.

It is framed by monumental, linear concrete slabs, resembling the entrance of an underground bunker and juxtaposing the natural undulations of the site and the surrounding stone walls.

“Respecting the complexity of such a majestic project, I felt the need to focus only on this specific moment: the prologue of the space experience, the entrance,” Bossi told Dezeen.

“Through a partial, fragmented, and unclear series, the idea was to not unveil everything about this story, but only a measured transition.”

Bossi carried out the series on a cloudy afternoon in the summer, taking only a film camera and a roll of film limited to 10 shots with him.

Limiting the number of potential shots in this way, Bossi says, was an attempt to “force myself to focus only on what I was feeling”.

While accentuating its character, Bossi hopes this will intrigue viewers and invite them to interpret the space in their own way.

“I want to have the viewer with me at the same time, at the very beginning of this experience, taking the very first few steps to be in front of this incredible door of the castle together,” concluded Bossi.

“I try to keep these images open enough, more as questions than answers, to make the viewer free to see what they want to see and let them proceed into the image and the story in the way they feel by themselves.”

Bossi is an architectural photographer based in Paris and Milan, best known for his minimalist style. Elsewhere, he recently documented the curved concrete Meditation Space by Japanese architect Tadao Ando.

In London, he photographed the skylights and staircases of the underground gallery at the V&A museum, which was designed by Stirling Prize-winning architect Amanda Levete with her firm AL_A.