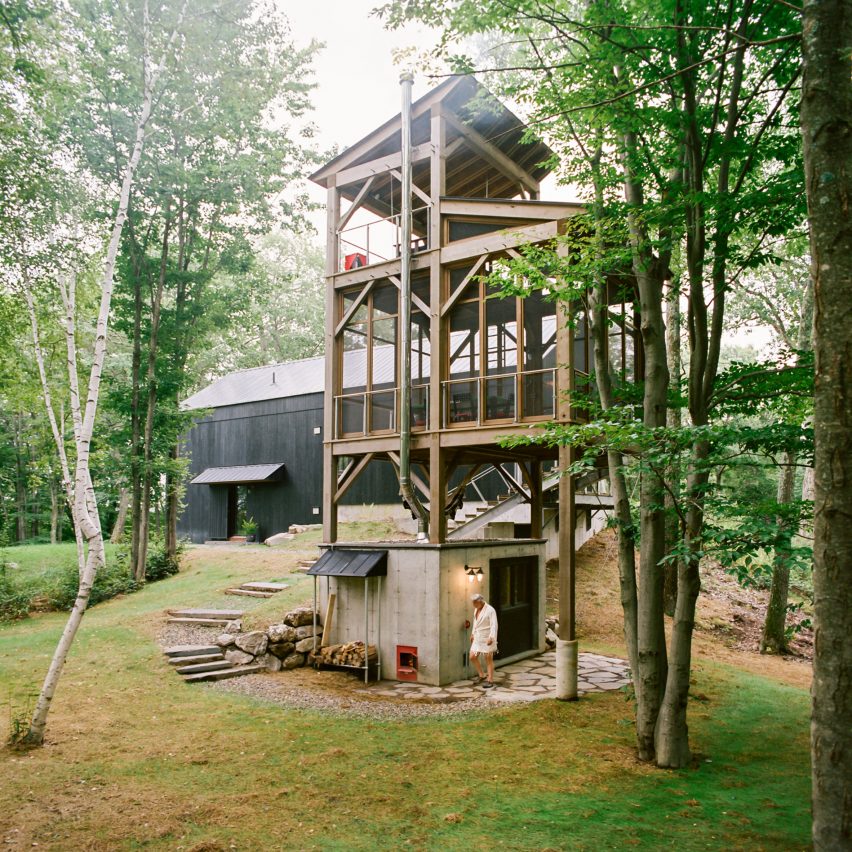 Set on a 75-acre patch of land with a cabin and a barn, the three-storey Sauna Tower is formed of a concrete sauna that functions as a base for the stacked platforms made of Alaskan yellow cedar.

The wood-burning sauna is reached via a grassy slope with stone-slab steps cut into the hillside. A small porch shelters a log pile next to external furnace doors.

An outdoor lamp lights the doorway and the sauna’s chimney extends past the stone roof and up the side of the tower. Inside, the sauna is lined with cedar and heated by a Nippa wood-burning stove.

Resting partly on top of the sauna, the timber tower has a simple frame with Y-shaped beams supporting two levels of platforms.

Mesh porch screens form a permeable barrier around the middle floor, allowing the air in while keeping insects out.

This outdoor living space is furnished with tables and chairs from Meccano Home, a furniture collection based on the popular children’s mechanical toy.

At the top floor of the tower is a lookout spot with open sides sheltered by a slanting roof. Slim metal railings form understated safety barriers around both levels.

A set of floating stairs made of steel beams with timber treads connects to a metal bridge, which leads from the first floor of the tower to a ledge next to the cabin. An internal ladder can be climbed to reach the topmost viewing platform.

BarlisWedlick built Sauna Tower to accompany the sustainable cabin and a barn that the practice had already built on the same site.

“It’s a strong foundation with a delicate timber frame structure atop, but as a counterpoint to the carefully controlled envelope of the Passive House cabin.”

Sauna Tower was the last of the projects completed on the site.

“We first tackled the barn program by salvaging and relocating a century-old barn from a nearby town,” Barlis told Dezeen. “We then developed a Passivhaus-certified cabin.”

“And to complement the cabin siting which was nestled within the forest at the top of a ridge, we added the tower which reaches up to the tree canopy and offers additional views from the site’s highest elevation.”

More inventive sauna design includes a sauna clad in blackened timber that floats on a lake and a sauna hidden inside a shining golden geometric egg.

Photography is by Brian Ferry unless otherwise stated.