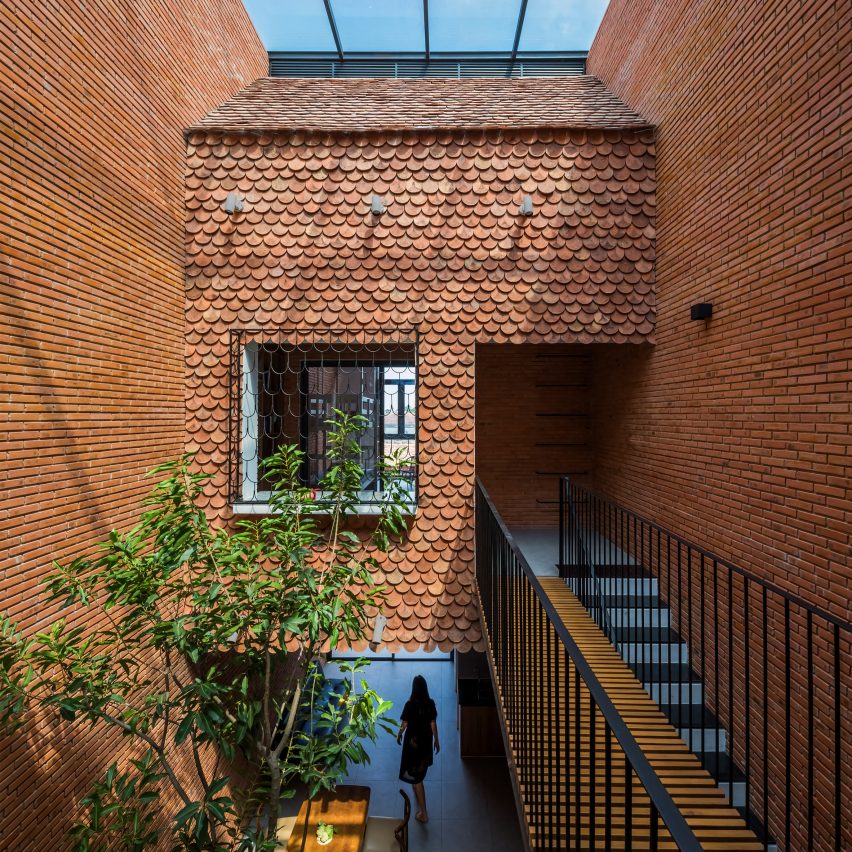 Vietnamese studio CTA has unveiled a house clad with scallop tiles, which were preserved by the owners when their old home was pulled down.

CTA, short for Creative Architects, designed the two-storey 2HIEN house for a family of four living in Tay Ninh, a provincial city in the south of the county.

The building was designed to respect the family’s memories of their old home and allow their traditions to continue into the future.

“The home would be interesting on its own if it was built from the stories of the people living in it,” said CTA, which is led by architects Bui The Long, Vo The Duy and Nguyen Thi Xuan Thanh, and entrepreneur Mai Huu Tin.

The most visual of these memory elements are the scallop, or “fish scale”, tiles that clad large sections of the facade and roof, as well as walls within the house.

Not only do these clay tiles bring a feeling of familiarity for the owners and their two daughters, but they also help to reduce the amount of new materials needed for the construction. This has both environmental and cost benefits.

“The recycled, old, fish-scale tiles have brought a colour of time, giving us a sense of rustic and intimacy that a new tile colour could hardly provide,” said the studio.

The motif is also repeated, in metal railings that cover one of the interior windows, and in perforated openings in the entrance gate.

Another important reference to the family’s history is the integration of outdoor living spaces into the design.

As the house occupies just the middle portion of its long and thin plot, there are framed garden spaces at both the front and back. In addition, the arrangement of the interior creates the feeling of an open-air courtyard at the centre of the house.

This is because the centre of the building is a double-height space, topped by a glazed roof. On either side, the two first-floor bedrooms are designed like little buildings of their own, with a connecting bridge and veranda-style balconies overlooking the level below.

“The veranda is not only a transition space between inside and outside of the house, but also a place where children sit and wait for their grandmother’s cakes coming back from the market, where mothers pick up vegetables or the family gather to pack cakes for Tet holiday in Viet Nam,” said the project team.

“In this house in Tay Ninh, apart from two awnings arranged at the front and back of the house, there are also two other verandas inside the house, creating emotions for this particular space,” they added.

The simple layout of the ground floor enhances this feeling of openness. There are two main spaces – a living room, and kitchen and dining area – but they are divided by a change in level rather than by walls.

CTA formed in 2014 and have since completed a handful of residential projects. Among them is Wall House, a family residence with walls made from a highly irregular arrangement of perforated bricks.

These same bricks feature in 2HIEN, forming the side walls of the building, although here they don’t make as much of a statement. Yet the building still stands out, mainly because it is significantly taller than the single-storey buildings that surround it.

The owners take full advantage of the garden space they gain, as a result of the building’s smaller footprint.

“The rest of the land is used for gardening,” said the studio. “It is both landscape and a space for friends gathering, where the husband takes care of trees, his wife grows vegetables, and the children play.”

Other recent homes in Vietnam on Dezeen include a small home in Ho Chi Minh City wrapped in glass bricks and a cube-shaped house topped with a plantable roof.

Photography is by Hiroyuki Oki.