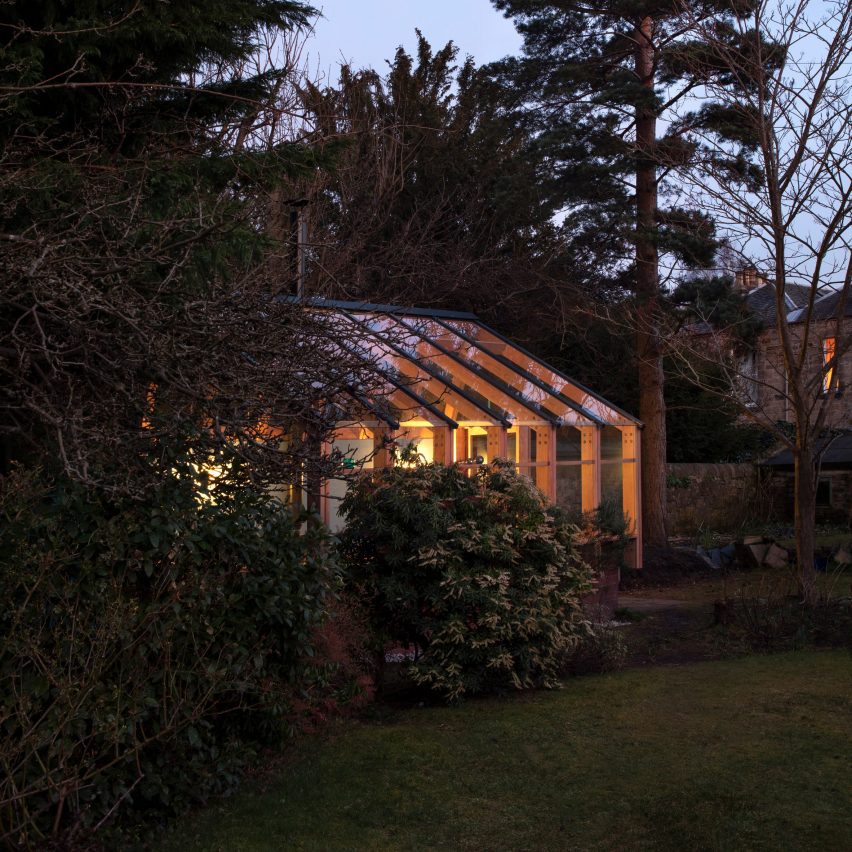 Scottish studio WT Architecture has created a glasshouse in Edinburgh as a writer’s studio in the garden of a Victorian villa.

Built to replace a dilapidated Victorian glasshouse, the studio was designed to replicate the simplicity and feeling of the original building, but make it suitable for regular use by the pair of client writers.

“We were asked specifically to maintain the simplicity of a glass house providing a sense of being almost outdoors,” said Susie Turley, senior associate at WT Architecture.

“But add a modicum of comfort through the provision of a small wood-burner for occasional use, as well as an improved fabric to keep the rain and wind out.”

Due to planning regulations, the studio occupies the same footprint as the original glasshouse incorporating its low masonry walls and leaning up against the tall garden wall.

To expand the size of the studio, WT Architecture worked with engineer David Narro Associates to create a structure that cantilevers from the building’s base and supports an angular timber roof.

“The form echoes but does not mimic the original glasshouse’s lean-to profile, adding height and width while the original masonry walls are preserved,” said Turley.

“The portal frames are formed from sandwiched Douglas fir timbers with steel plates at the crank points. The repeated bays honestly communicate their engineering with exposed fixing bolts.”

Within the studio, the desk extends above the cantilever to give the two writers a large space to work.

A raised plinth that supports the stove and curves round two walls of the studio was designed as an additional space to sit.

Turley hopes that the studio will provide the pair of writers with a simple, uncluttered space to work away from their home.

“This is not a home office for surrounding the user with all the accoutrements and comforts of the home, but providing a simple and clean shelter away from such clutter, distinct from the enclosure of the house, and more typical of the bolt holes and dens at the bottom of the garden that inspired us as children,” she said.

“The hope is that the space allows the writers to reset their mindset in a distinctly different environment to their home, surrounded by changing shadows on desk and walls, the sound of rain falling on glass, and the sound of the wind in the trees surrounding it,” added Turley.

Other garden studios on Dezeen include a green studio shaped like an artichoke designed by Studio Ben Allen and a studio with an entirely pine interior in New York.

Photography is by Gillian Haye.